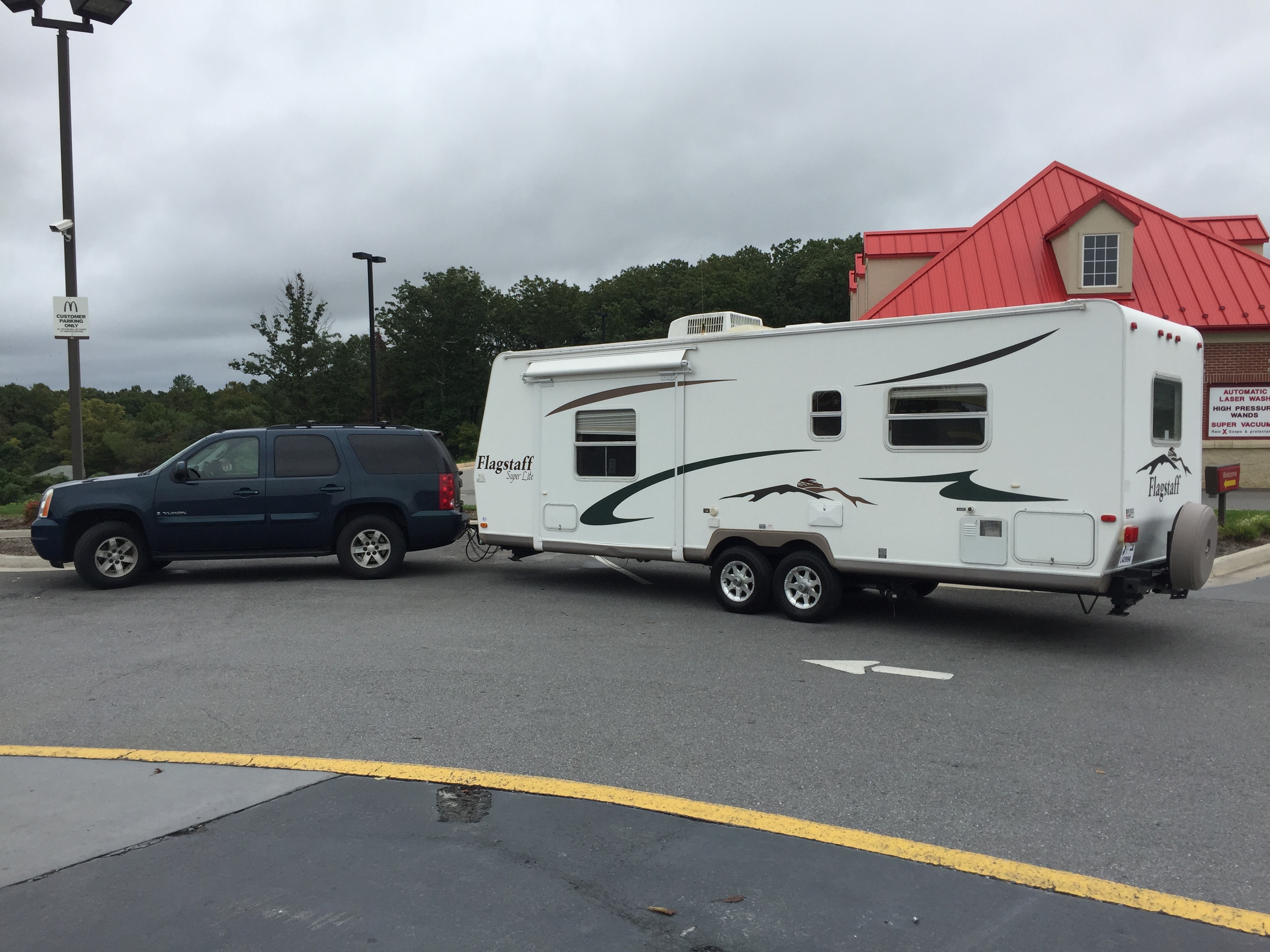 I’ve been a bit quiet on the blogging front, as it’s been a busy time on the hunt for our home for the next year. We’ve been North, we’ve been South, we’ve had rain and shine, and at the end of it.. we have a trailer! Here’s the lowdown on what we saw, what we bought and how we came to our decision. Those of you who’ve read the SUV posts will note a continuing theme about towing capacities…

What we were looking for:

We were only looking at second-hand trailers, due to our budget, so we also had to take into account condition. Steve gave us as many tips as he could about what to look out for, to avoid obvious pitfalls.

The Heavy One – We found a trailer locally on Craigslist so the four of us headed over to take a look. This was the first one we’d been inside, so having Steve and Deb there was really helpful. They layout was great, everything seemed in working order, and the seller was even throwing in her picnic ware! Deb and I were sold, but sadly when we came out to see how the guys were getting on, they had decided it was too heavy – over 6000lb, which would make towing over mountains a bit tricky.

The Smelly One – This was at a dealer an hour or so North, which looked a professional set up. John and I were going solo on this visit and we were excited to be driven around the huge lot in a golf cart. We’d seen a nice trailer online, which was our first stop. Walking into it, however, was like walking into a sewer. I couldn’t get over this, despite the salesman telling me that it would be sorted by the time we picked it up.

The Broken One – At the same dealership, this featured another nice layout, as well as being newer, but had a broken table and what looked like a broken slide. I asked if these would be fixed when we picked it up and our salesman said…no! So that was another no from us and with that and the Smelly One, Steve later vowed not to recommend this dealership in future as they obviously don’t keep their stock well.

The Long One – Steve has bought from this nice, family-run dealership before, and we liked Larry the salesman. Unfortunately, the only one he had in our price range was a bit long, at 30′, and also slept 6, with an extra bunk room, and we would rather have the extra living space. Sorry Larry!

The One That Was Miles Away – Towards the end of the RVing season (basically now), dealers have fewer models available second hand, as they are getting fewer trade ins for new. John came up with a trailer that looked good online, not too long, not too short, not too heavy. The obvious downside was that it was 3 hours’ south, on the North Carolina border. And it was also over budget. We mulled it over and John called the dealership to see if they could do something on the price.  The conversation went well, so a couple of days later we headed south to the border, in driving rain. When we got there, we really liked the trailer, which had the perfect layout for us, and seemed, on first inspection to be in good order. We made a list and took photos of anything that concerned us, and discussed all this with Steve over dinner that evening. He had a couple of follow up questions, which John checked over with the dealer the next day, and then we fixed up for a final viewing, by which time the dealer said they would get any issues resolved and have it set up and ready to go, should we be happy with it.

We had lots of banking challenges, again, with getting set up to pay for the thing, and were also facing a really bad weather front coming in from the coast, linked to Hurricane Joaquin over the Bahamas. Steve was keen to avoid John’s first experience of towing a 26′ trailer being in high winds and driving rain, so it was important that we could pick up the trailer before the weekend. To this end, the four of us got up early on Thursday morning, and headed for the border again. Most issues had been resolved, though Steve noted some concerning damp wood in the storage compartment under the trailer, which we hadn’t noticed (a seasoned RV’er, he pulled up the lino to check). For this, he got us $500 knocked off, and we did the deal.

With our trailer hooked up through the tow package (see earlier SUV posts!), we were ready to roll. I half expected John to ask Steve to drive us out of the lot and on to the Interstate, but he was obviously feeling confident after some tuition the night before from Steve, using a 10′ trailer. Sure enough, he got in the driver’s seat and away we went, the huge, white beast shackled behind. With a quick stop for lunch (McDonald’s of course – we live in a trailer now!), we were back at base before dark.

My heart was in my mouth as John started the ascent up the mountain, but he took Steve’s advice to ‘floor it’ and the Yukon earned its stripes by getting us, and trailer, up to the bottom of Steve and Deb’s steep, curving driveway. Some calm guidance from Steve, and some careful manoeuvring from John, and we were bang in the space they were aiming for. I could not have been more proud or impressed with John – many husband points have been accrued. Huge thanks also to Steve and to Deb for giving up their day, as well as the many hours of ‘which trailer should we get’ discussions, in the days leading up to this purchase. Another task achieved, with a lot of help from our friends. Next step: Get it kitted out to live in….