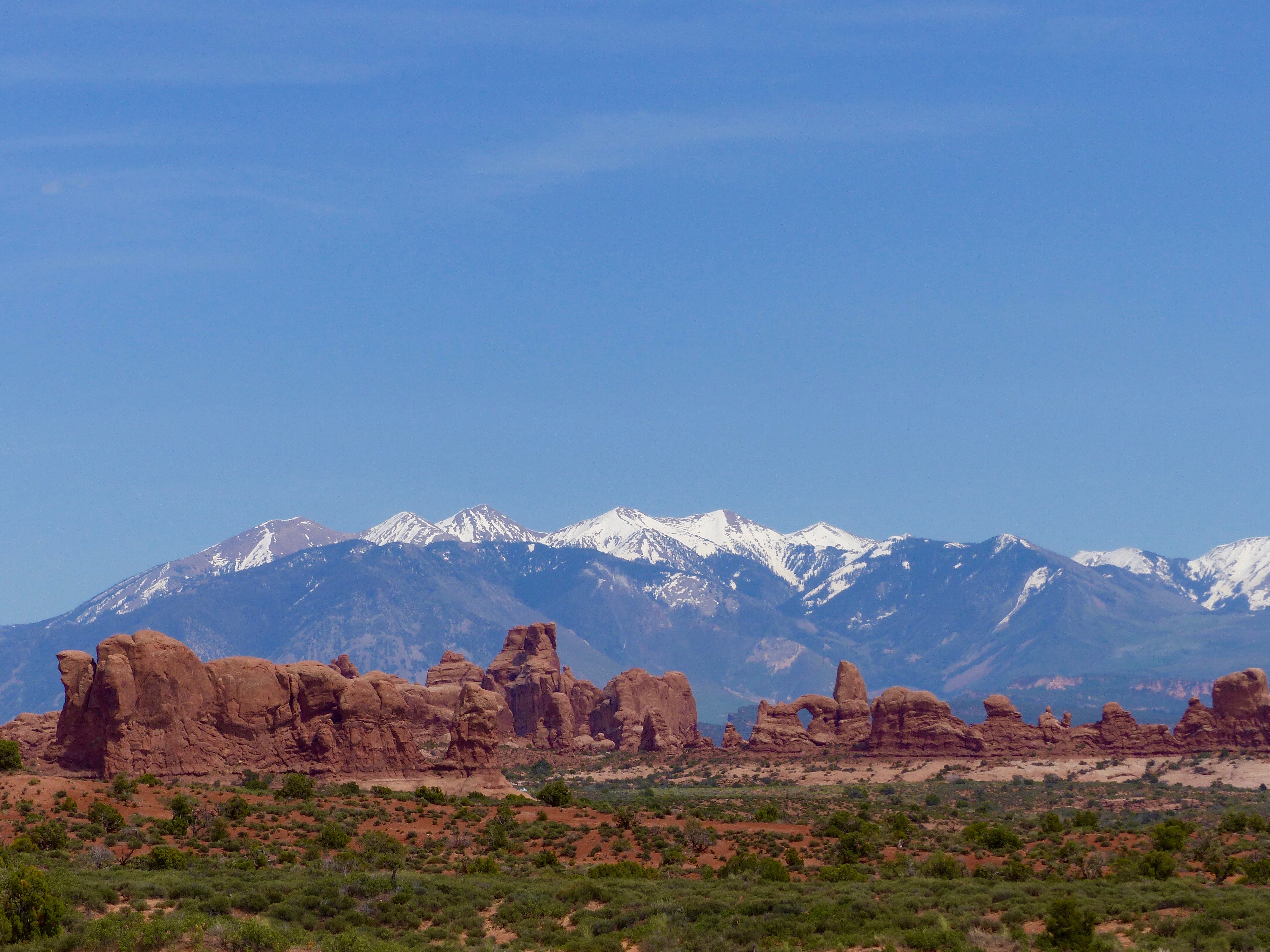 Our unexpected adventures in Oregon left us with a long haul to reach Utah in time for our friends, Tina and Tom, to arrive the first week in June. Having scoped out southern Utah in March (see here), we knew we loved the state, so we decided to speed through Idaho and go hell for leather to try and give ourselves a few days near Moab, checking out numbers three and four of the ‘Big Five’ Utah National Parks before going to get the guys. When it came down to it, this left us three days to do 1,000 miles, towing the trailer.

And who doesn’t want to spend their second anniversary sweating in an SUV, 100 degree heat outside, windows down, air con off, heater on full blast? John and Steve tell me this is the best way to keep the engine temperature down – the Yukon may have been cool, I certainly was not. We’d spent the previous night at a state park outside Salt Lake City (in Utah, at least, but still hundreds of miles to cover) and had gone for a ‘romantic stroll’ round the lake at sunset. This left me with mosquito bites so numerous you could create a dot to dot from them, so I was far from feeling the anniversary vibe as we pulled into our desert campground, just outside Moab. Lucky John, I hear you sympathise…

Fortunately, our campground had all mod cons. Full hook-ups to run our air con and beautiful big, cool restrooms, in which I showered and made-up in peace, before emerging rejuvenated, to be taken to a desert oasis in Moab for Wagyu steak, cocktails and Californian Zinfandel. We sat in the fairy-lit courtyard, the desert heat now faded to a holiday-esque evening warmth, and laughed at our ‘dream’ anniversary, which really it was. We were in Moab with four clear days ahead of us before we had to move anywhere, and two National Parks on our doorstep. Our love of this lifestyle was at its peak.

Next day we were up at 6am and headed to Arches National Park (number 3 of the 5). We’d heard it gets super busy so wanted to be in by 8. We made it just and zoomed straight through, but as the Yuke climbed the red cliffs from the visitor centre, we could see down to the entrance road where a queue of 50 cars snaked out the gate. This was going to be a busy park.

It’s easy to see why it’s so crowded. Arches is famous for its high concentration of ‘fins’ – natural rock arches formed through a perfect storm of geology and weather. Add to these fiery beauties a backdrop of blue skies and ice-white mountains and you have a combination that reduced me to platitudes at every bend in the road: “Wow it’s so beautifull” “Woah, look at the mountains”… you get the picture.

Temperatures in Arches that day were set to touch 100 F (about 38 degrees), so in a red rock desert with minimal shade, we got our big hike out of the way early on, starting our climb up to Delicate Arch before 10am. I was nervous, as the ranger had warned us of ‘scrambling over slick rock and mountain paths with sheer drop offs’. I steeled myself to see this most famous of the arches, and was surprised to find it less scary than I feared. The arch frames the mountains perfectly and along with the hundred or so other people in and around the area, we enjoyed a rest with a stunning view.

Peace in Arches is tricky to find, but weirdly we found it in a ranger talk, standing right in front of Balanced Rock – a rock that sits so finely atop another formation, the ranger couldn’t rule out it tipping off there and then, as its partner did a few years ago. We’re always surprised when ranger talks are a lot quieter than we expect, and there was only us and one other family listening to Lisa tell us how this area came to host all this natural beauty – I won’t do it justice here, but it really did give me a better comprehension of how these amazing formations came to be.

We found a much quieter park in Canyonlands the next day. Park four of the Big Five, we expected similar levels of tourists, but on a hike the ranger recommended we saw not another soul for the whole time. The ‘whole time’ turned out to be a lot longer than we expected when, thinking we were nearly done on our 6 mile hike, we realised that what goes down, must come up, and that having hiked down into a canyon, it was wishful thinking to believe we wouldn’t have a serious (and hot) climb back up the other side. This incredible but worrying experience taught us an important lesson about desert hiking – you need a lot more water than you think. We had about 4 litres between us that day, and we only just made it over the 4 hour period by the skin of our teeth. It was worth it though, for despite the severe climate, we were treated to stunning views, as well as a wealth of birds and a rainbow of bright desert wildflowers.

The scenery in Canyonlands really took our breath away. The Grand Canyon is epic, but it can be difficult to comprehend, given its sheer scale. What we saw here were huge canyons, carved again by the Colorado River, as well as the Green River, but from the viewpoint of the Island in the Sky mesa, we were able to get a good view of what nature can achieve over the course of time. There is also the benefit of not being bussed to and fro points, and not being elbow to elbow with selfie-takers. In the evening we joined a dark skies ranger talk, seeing the Milky Way above our heads, and viewing Jupiter, Mars and Saturn through telescopes.  All together a much more peaceful experience and one of our favourite parks to date.

Moab itself is a pretty crazy town. Smack in the middle of a roasting hot desert, flanked by towering red rock mesas and snowy mountains, it’s less of an oasis than a melting pot. From the water sprays installed to cool outside diners (and pedestrians by extension), to the orange flags available for greater visibility when crossing the roads, we saw things here that we’d never seen before. It’s a town that twenty years ago barely registered and now, with the boon of a new love of outdoor pursuits, is a thriving tourist base. From here you can raft the Colorado, climb the mesas, visit two National Parks, go off-roading in Jeeps and ATVs, and generally get outside and explore the other-worldly terrain that Utah offers, not to mention ski in the winter. We could have spent weeks here, but it was time for us to hitch up and roll out, to the quieter, but no less beautiful, town of Torrey, where we would set up camp before fetching our friends. Another week to go in Utah, and some of our favourite people to share it with.