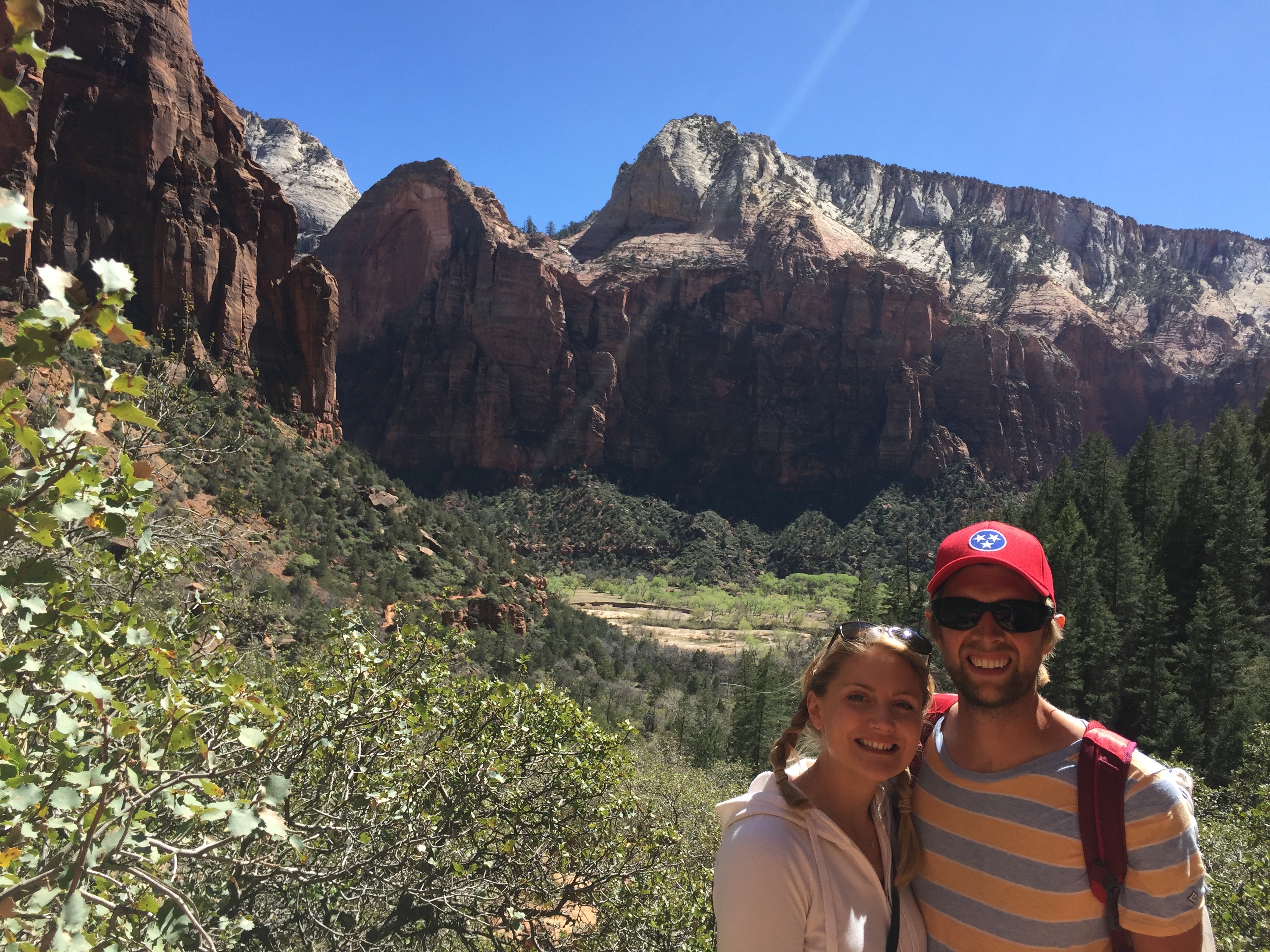 by Anna Syson in This year of our lives, Travelling 4 Comments

Right now, John and I are enjoying some R&R, near Palm Springs in Southern California (or SoCal as the LoCals call it..). In 5 days’ time, the first of our visitors arrive, in San Diego, and so begins 3 months of excitement, with lots of friends and family flying in from home to see us and share this adventure. Our dear friends Tina and Tom were so easy going when we told them April and May were full, they promptly booked flights to Salt Lake City, roughly where we thought we’d be in June. ‘Who ever has heard of holidaying in Utah?’, you might ask. We love them all the more for it and thought we’d better get some research in to make sure the visit will be worth their while.

Our first glimpse of Utah was in fact a couple of days earlier, on our drive through Monument Valley, which straddles the state line with Arizona. This is another place that both of us have always wanted to see, yet somehow never pinned down geographically in our minds and with more surprise, we found it was within driving distance of our Page campground (we must sound like the most useless road trippers ever to grace the highway) so off we headed for the day.

As the name suggests, it’s essentially a long valley, surrounded by huge mesas and buttes -massive formations of red rock, which have been eroded into all manner of shapes by the wind. It’s a fabulous drive, especially returning south from Utah, as the yellow line down the blacktop seems to lead straight toward a rock city, like the Yellow Brick Road. Pulling over on the Utah side for some lunch at the aptly named Twin Rocks Cafe, John suggested that rather than pay the $20 to enter the Navajo reservation and drive round the rocks, we try another place he’d heard of and which we’d driven past a sign for – the Valley of the Gods. I drank to this (and was pleased, being in Utah, that I was able to) with a very nicely chilled rose. You can drink with a meal, we were later advised, so the state isn’t totally dry – good news for visitors!

The Valley of the Gods is equally well named and is accessed only via a red, dirt road, which the Yukon lapped up. The area is managed by the Bureau of Land Management, an agency here that often manages large tracts of public land and allows free, or very cheap, camping. In this case, they also maintain the dirt road and so, with no charge, we took the Yukon on the trail around the huge formations of rock, which I can well imagine would have looked to ancient people like their gods were watching over them. There is red as far as the eye can see – red road, red rocks, red desert, and then bright blue sky. It’s quite a vista and would be a fabulous, if primitive, place to camp.

Arriving at our Utah campground on Tuesday, having escaped 60 mph winds in Arizona, we were somewhat dismayed to see the skies cloud over and snow begin to fall. Our campground, though bucolic (an orchard nestled in a mountain valley), seemed quite unprepared for visitors, despite being fully booked, and the showers and laundry were out of order. It was a chilly stay, with our pipes freezing two mornings, and our laundry piled into epic proportions by day four, however the location was perfect for a quick taster of southern Utah and we made the most of it.

One of America’s ‘Big Ticket’ parks, Zion National Park, was right on our doorstep, so we made that our first stop, entering through an impressive tunnel carved right through the towering mountains. Zion is a relatively small park (145,00 acres to Big Bend’s 800,000) and with Spring Break in full flow, it was crowded with families and students, so not the tranquil experience we favour for hiking days. It is, however, incredibly beautiful, another impressive canyon, this time on a more manageable scale. A river runs through it, surrounded by the bright green of the cottonwood trees, John’s favourite. We’re coming to love these trees, as in the desert they are a sure sign of water.

We did several hikes during our two days in Zion, including an exploration of the Emerald Pools (not green but brown that day!) and a hike up the canyon wall, with views down over the park. I did chicken out of the Angel’s Landing trail, described as more of a climb than a hike as it requires you to pull yourself up via chains. On a quiet day, I might have braved it, but I figured no one needed me having a melt-down half way up (or down), when they and a hundred other people are trying to get by.

On a walk along the river, we met another British couple, our first fellow Brit RV-ers, Jem and Kev, who were chilling under the cottonwoods, playing cards and waiting to go up the climbing trail. They are also taking a year out from their jobs (you can see more at their blog) and have been to Asia and Australia/New Zealand, before taking 3 months for the US. We’ve been surprised not to have come across a few more Brits but of course we know from the help we had in getting on the road here that it would be even more difficult if you were trying to do a year starting from scratch.

Our next Utah stop was Bryce Canyon National Park. We had spent a very enjoyable evening back in Virginia talking with our friend Deb’s brother, Russ, who is a keen RVer and takes his C-Class all over the place, often finding neat boon docking spots and meeting all manner of people, including Jimmy Carter. He gave us lots of tips for places to see along our way and the other National Parks of Utah were on the list. So while we were within striking distance, we headed to Bryce, though after the wall to wall tourists of the Grand Canyon and Zion this week, we set off with some trepidation in expectation of another hectic day.

Warning – I am about to eulogise about a park again..! I LOVED Bryce. I loved it so much. We turned up, went to the visitor centre to get a hiking map and chat to a ranger who was clearly gunning for a second career as a comedian, and set off on a hike to the hiking trails, along with seemingly quite a lot of other people. Those people, however, were all bound for the ‘If you can do only one hike, make it the Queen’s Garden/Navajo Trail’ zone, and we were headed for Fairyland (yes, really).

Bryce is another canyon, so you start off on the Rim Trail and look down, a bit like at the Grand Canyon. But here, the scenery is different and somehow more comprehensible – the canyon walls and valley are a forest of pointy, red, rock formations, called hoodoos, and when we visited they were tipped here and there with unmelted snow (which, along with wind, serves to create the shapes), dotted with intense green from the pinyon pines and juniper trees along the trails. All this against more blue sky and a few fluffy white clouds made for another breathtaking Utah view.

Our trail was quiet as we started the descent into the canyon, we saw only a handful of other people, and wound our way down the red dirt path, crunching over snow in the shadows and warmed by the sun on our backs. Around us the landscape was heavenly, Martian perhaps but with greenery. I felt lightheaded with happiness, at the space, and the peace and the beauty in every direction and practically skipped down the path. We hiked past huge rocks, paler white on this side of the park, and eventually reached a formation called Tower Bridge, for reasons that became apparent when we got there. At the base of Tower Bridge, majestic and white-capped against the blue sky, a snow-melt stream was bubbling, and we sat there to eat our picnic, in total peace and quiet.

Having found the solitude we were craving, we decided we’d better see the famous Queen’s Garden, so headed back up, round the rim, and down a steeper descent from Sunrise Point, right into the midst of the hoodoos. They are so tall from above, you can’t imagine walking around the bases, but sure enough we arrived to wend our way through towering red rocks, under natural doorways, and found ourselves standing at the base of a hoodoo they call Queen Victoria, according to the sign after ‘a statue of an English queen’ (or maybe after… a real life queen, we thought?!). From there, an even steeper trail took us back and forth up more red rock and back out to Sunset Point, our senses assaulted continuously by the epic views, which wouldn’t look out of place in Game of Thrones.

You’ll see the binoculars round my neck in the photo above  and this of course is because I am turning into a bird nerd. In Bryce we spotted a Clark’s Nutcracker, which is a new one for us and as with Big Bend, we were fascinated by the different ecosystems within the one park – three here, each with different plants, trees and creatures, depending on the height above sea level. I’ve never really been that outdoorsy but this year is giving me an opportunity to enjoy it in a way I never imagined I would, and I have found a lot of mental peace hiking, looking and listening.

We finished our day in Bryce with a drive up to the highest point in the park, 9,100 ft, checking out the campgrounds on the way, and decided that this could definitely be an option for our June return. The elevation makes it a lot cooler than down nearer sea level, so hiking could still be enjoyable in the heat of the summer. It’s on the list, but we’d welcome any other Utah tips too, especially of non-hiking activities, as we want to mix it up a bit.

The next day, after our neighbour helped John thaw out our water hose, we left beautiful Utah and headed into Nevada, happy that we can look forward to a return in June, with the added joy of close friends in tow with whom we will share new experiences. And of course a lot of red rocks!