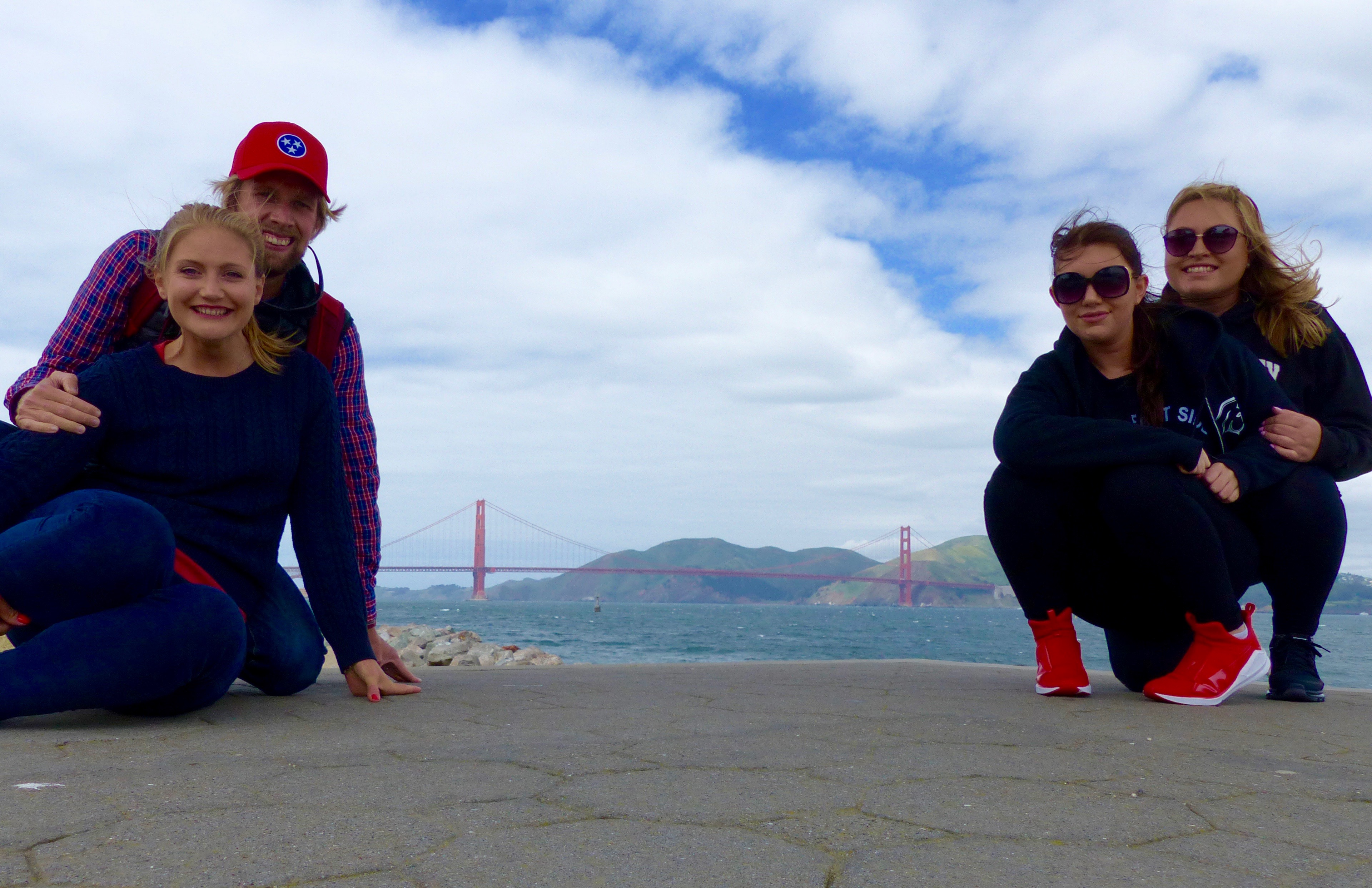 As many of you know, I’m a girl who likes my luxuries and having one of my greatest partners in crime (and her equally glamorous sister) staying with us over my birthday was a clear and present danger to John’s budget spreadsheet. Fortunately he is nothing if not pragmatic and so naturally planned for this short-term blip on the bottom line of frugality, stashing away a pot of money called ‘The Luxury Budget’ from day one, to which I have had no access and which to date had been called upon only for a (very lovely) Valentine’s break in Nashville. Part two of Carly and Erin’s visit therefore began on my birthday and marked a move out of the trailer into hotels and Air B & Bs for the rest of their time with us and, John and I, into my parents’ visit (who had decided trailer life was a stretch too far for them).

Between them, John and Carly had arranged a birthday spa trip for me, so once we’d stuffed ourselves with donuts, s’mores, wine and cheese (and a new headliner hot chocolate for Erin) in Pismo, John produced champagne and cupcakes, put the trailer in storage, and took us all on a birthday tour of the Big Sur coast towards Monterey and our hotel. It felt very weird leaving the trailer, which I imagine like a small scale version of leaving your child at school for the first time; we hoped it would behave, would be looked after, and not punish us for neglect when we return at the end of the month.

Trailer worries quickly vanished as we made our way up the beautiful California coast, the sun shining through ever stronger as we road-tripped north, fair speeding along unencumbered by towing on the twisty roads. We stopped to watch sea lions en route and then pulled in for lunch at a cafe/restaurant I’d come across online before all phone signal stopped somewhere between Pismo and San Simeon. We parked up at Nepenthe, hoping for some half decent pit-stop food, and I was overjoyed to find that the cafe had a huge terrace, perched on the edge of the cliffs, looking straight over the Pacific. The name means ‘a medicine for sorrow’ in Greek and this is no misnomer. We ate lunch and drank mimosas in the sunshine, I opened some cards and presents that had arrived in various locations from thoughtful friends and family at home, and generally felt very lucky.

Onward we went and arrived at the Monterey Plaza Hotel. I hadn’t anticipated the extent to which the luxury budget had been pressed into service and the choice of hotel blew me away as we pulled up into the sheltered car valet, right on the ocean front, and had our (comprehensive) luggage taken up on a gilded trolley by a uniformed porter (most of this was John’s, of course).

The surprises didn’t end there.  Once we were settled in our huge interconnecting rooms, with adjoining sun terraces, a knock at the door by room service brought champagne. As John already had the Veuve on ice, I was overwhelmed to find that these bottles were from our gang of friends in Cambridge, who had so thoughtfully made sure that not only cards but now bubbles reminded me how lucky I am to have these people in my life. We sat out in the sun, toasting Katie and Mark, Tina and Tom, and Jenni and G, with whom I would have loved to be sat round the table but who were certainly there in spirit.

A manicure and pedicure later (such luxury for these poor, hiking battered feet), and we were off out to dinner at an Italian that Carly and John had found, followed by an exceptional wine bar, Bakai, in which we were treated to tastings of a great selection of local and South American wines by the lovely Anjelica. It was really a day to remember and I found I adapted surprisingly well to the luxury of it all, as well as to having lots of girl chat to enjoy with the bubbles and treatments.

The next day, Carly and I soothed our hangovers with a day of pampering, starting with a full-body treatment that scrubbed, oiled and massaged our weary bodies. John and Erin, by now partners in crime, had gone to the nearby aquarium, so post-massage we relaxed, ate beautiful local strawberries and sank a lot of fruit-infused water, before braving the rainy roof terrace to luxuriate in the hot tubs. There is something particularly decadent about being cocooned in hot bubbles, while a light rain falls, looking out over the misty bay and chatting non stop to one of your favourite people.

Erin joined us for one of the best facials we’ve ever had and then we were ready to return to our rooms, where our laziness continued with a pyjama party, a scary movie and take out and supplies sourced by Team Task (John and Erin). The end to a perfect birthday get away, and one in which John handled himself manfully amidst the make-up chat and the bathrobes.

From a rainy Monterey, we made our way (via Sephora and Victoria’s Secret – sorry John!) up to San Francisco, where my parents would be arriving the next day. We checked in there to an Air B & B apartment, in Korean Town, and found ourselves set up in another luxury pad for a few nights – three bedrooms, two bathrooms, huge lounge/kitchen/diner – where it seemed only right to indulge the softness of the corner sofa ( I do miss a good sofa) with a takeout combo of pizza (starter) and noodles (main) – by this point we’d all given up pretending to watch our waistlines and all agreed the noodles and donuts could be our mainstay forever.

Day one San Fran dawned hazy, but we’d decided come hell or high water that we were cycling the Golden Gate Bridge over to Sausalito, a journey that Carly and I had achieved together the last time we were in this city together in 2009. A bunch of girls, trying out new makeup, and one very time focused John, combined to get us out the door later than planned but in time, we thought, to get to the airport for my parents’ plane.

And what a day we had. The clouds cleared as we neared the bridge, and the Bay was radiant, spring flowers and green grass surrounding deep blue water, with the towering red bridge posed for a postcard in between. We sped down the hill into the pretty harbour town, plotting Carly’s eventual waterside villa, and hauled our bikes on to what we hoped was the right ferry, by the skin of our teeth. A few San Francisco hills worked off some of our over indulgence, just in time to greet my folks and take them home for the now customary grilled cheese arrival meal.

Our final day with the girls was also our first with my parents, and to wake up with all these wonderful people around me was a greater pleasure even than the luxury of the sofa. We started our day with a cable car to Lombard Street (the wonkiest street in the world), another revisit for some of us but a first for my mum and Erin and it was wonderful being in tourist mode all together.

The hurried visit to Sausalito the day before had given us the idea of taking my parents there, this time by boat rather than bike, for a more leisurely lunch, and we weren’t wrong in our choice of first day. My folks love a boat trip, and Ma’s face at seeing San Francisco for the first time from the water was a joy to behold. The city was resplendent in the sun, something Pa, John, Carly and I knew was not a usual occurrence in this famously foggy location, despite Mum’s assurances that she ‘knew it would be sunny’.

For lunch, I took the advice of our new friend Sherry, who got in touch to suggest the beautifully placed Scoma’s, a wood-built restaurant jutting out over the blue water. John and I are generally skeptical of waterfront dining, as so often we find places rest on their well-located laurels, but I trusted Sherry’s recommendation and we were not disappointed. Mama got her longed-for dry martini, and we were seated with beautiful ocean views to enjoy various local fish and wine. I have my fingers crossed that we achieve our plot to move Carly to San Francisco, so this can become her local!

The next day we were saying goodbye to these two gorgeous girls, who had shared so much with us – roughed it when called for, gone without make-up and hot showers, braved killer squirrels, sharks and campsite criminal conspiracies, and come out smiling.  They have given us memories to treasure. I was going to finish with something about that being worth more than champagne and spa treatments, but I’m not sure I’m quite ready to commit that in writing – got to keep John on his toes for next year after all…!