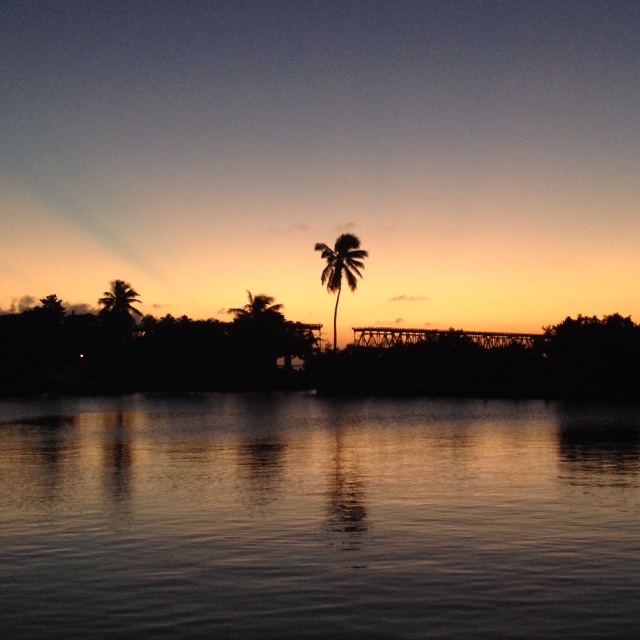 I’ve wanted to go to the Florida Keys for years and despite a lot of comments about them being crowded and commercialised, it was an itch we just had to scratch. We soon discovered that the state parks in the Keys are booked up nearly a year in advance, and when you look at the prices of the cramped private campgrounds, you can see why. I therefore spent every opportunity I had checking Reserve America (the one-stop-shop for all state park camping) for cancellations, with Bahia Honda State Park, in the less developed Lower Keys, at the top of my list. It wasn’t looking good until, in mid-December, I stumbled across one night free and snapped it up. A few days later, the next night became available and although we would have to hitch up and move to a new spot, we went for it, as the opportunity was too good to miss.

Driving from Miami down US1, which becomes the Overseas Highway as it climbs on to Key Largo, I was excited to finally be taking a road trip I’d always dreamed about, but this was tempered by a mild panic that we were going to get to our dream campground after dark. We’d had an issue with the trailer brake controller in Miami and had spent most of the day sweating in an RV repair lot, while a very kind man fixed the problem. Fortunately, we zoomed over the bridges from key to key, surrounded by clear blue water, and nipped into our spot at Bahia Honda just as the sun was setting. Throwing some beers in the cooler, we went down to watch the sun set, all alone on a strip of beach, with just a heron for company.

The bridge you can see in the picture is part of the old rail road and later highway that was first built to link the keys. It’s now been replaced by a new road, but it’s quite a sight from the island.

Bahia Honda really is a dream campground. The sites are spacious and private, the bathrooms clean, and the island has some absolutely beautiful beaches. Of course, the pictures don’t tell the whole truth – one of the beaches had Portuguese Men O’War (is that the plural?!) washed up every ten paces or so, and the tropical vegetation and swampy mangroves give off quite a stench at times. The new highway also runs right over the middle of the park, so there’s road noise that you wouldn’t expect from looking at the tropical beach and knowing it’s a wildlife sanctuary.

But it was a stunning place to stay and enjoy the Keys more as they used to be. The beach on the other side was safe to swim and we relaxed there in the afternoons. John (a seasoned diver) taught me how to snorkel, which I’d tried it once before unsuccessfully. This time, with characteristic patience, he brought me through my asthmatic anxieties about having my air cut off and led me through the warm waters to see shoals of tropical fish floating all around and far below me. This fascinated me so much I forgot all my worries and relaxed in the calm, underwater world.

We also enjoyed a free ranger-guided birding tour, another reason why State Park camping is such great value. The rangers helped us with identifying shore birds on an early morning walk along the beach; all good skills for ticking of spots in the Birds of North America book our friends gave us as a going away gift.

It’s such a popular place, we were fortunate to have had this time here and the weather was truly tropical. On the day we had to move spots, we reported to the ranger station as instructed, to find a queue of people crammed into the tiny air-conditioned space, waiting to see if any spots came free. Some had driven up and down the Keys looking for camping, so it really is somewhere to book in advance.

Our next move was to Sunshine Key RV resort. At the other end of the camping spectrum, this had a swimming pool, marina, laundry, DVD and book library, for a whopping $140 a night! Fortunately we got it for half-price through our Passport America membership. We spent most of our time there back at Bahia Honda, and also visiting the wildlife reserve, but our number one excitement about staying in a private campground like this was the on-site gym with air conditioning! I’ve been trying to keep on top of the tempting American food situation by working out, mostly on the ground outside the trailer, which can be pretty gruelling in the humid heat of southern Florida. At Sunshine, we were up early and in the gym, loving the cool quiet (snowbirds, it seems, aren’t big gym people), and the fact that there was a set of free weights. It made us feel great, and reassured me in fact that our four-times-a-week gym habit at home is not born of boredom but of genuine enjoyment.

Our spot at Sunshine Key

From all this wholesome happiness, we would be driving down to Key West, where we’d been warned things would be ‘crowded and crazy’. They weren’t wrong but it deserves its own post, so watch this space…