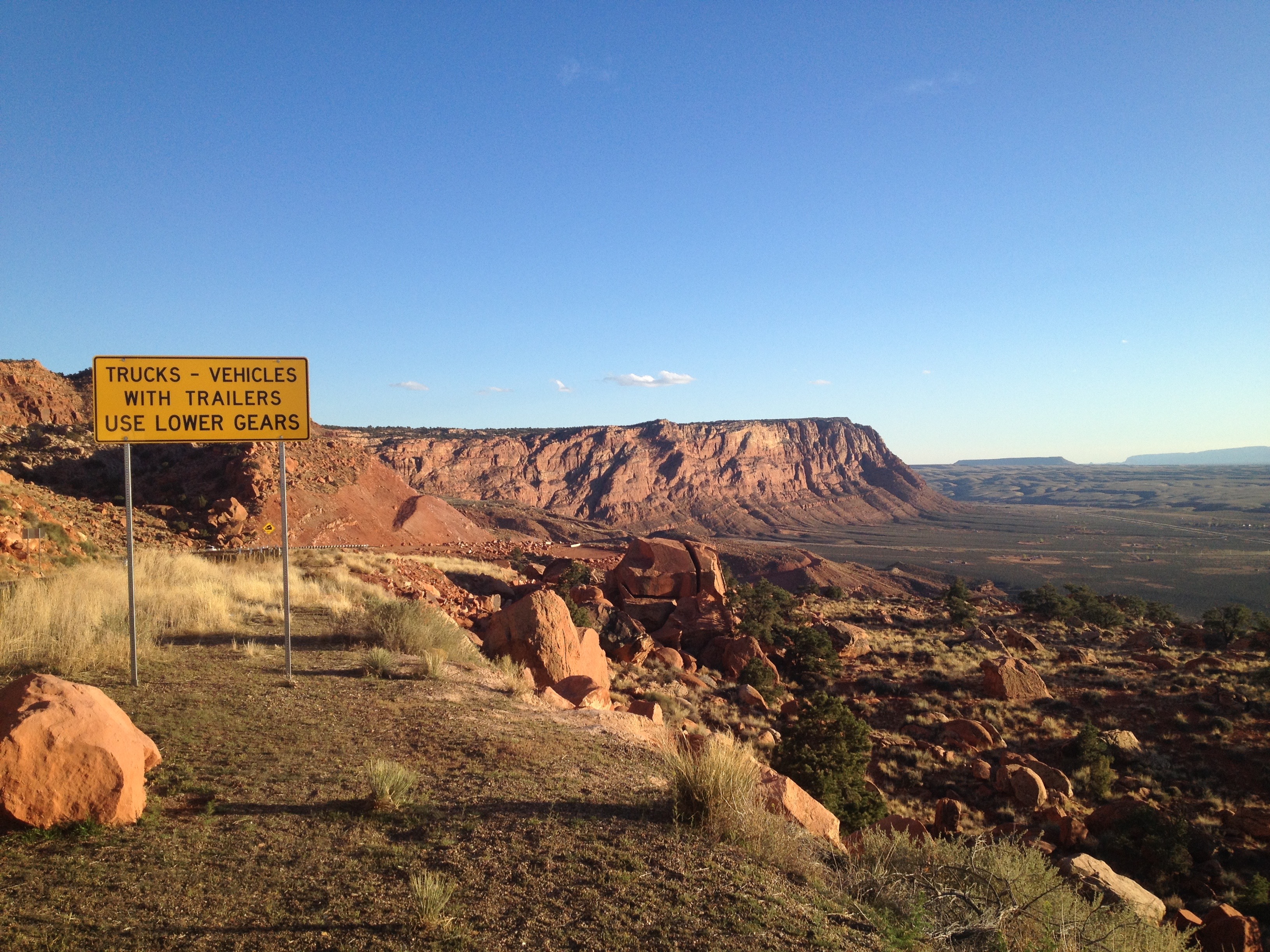 It’s currently minus 2 degrees (28F) at our campground in Utah, and we can’t leave as planned for Nevada as our water pipe is frozen solid. While John battles with this, it seems a good time for me to return to the desert, with a round up of our favourite spots from the last couple of weeks, in amazing Arizona – a state that under-promised and over-delivered.

Most famous, of course, is the Grand Canyon. We had a lot of people telling us ‘Oh, you should go to the North Rim, the South Rim is just wall to wall Korean tourists, not as impressive as the North, the North is so much better etc’ – all really useful advice in March when the North Rim, 1000 feet higher, is frozen and not open until May ( you can ski in, if you happen to have a set of cross-country skis handy). As it’s Spring Break here (when does it end?!), we decided to try our luck on a Monday, in the hopes of getting some elbow room.

We drove two hours from our campground in Page and by 9.30am the car parks were already filling up. They tell you to go early, and we discovered this is only partly about the parking. Compared to other National Parks we’ve visited, the Grand Canyon is like a theme park and to get to most of the hikes, you have to get a shuttle bus. Despite John’s normally radar-like sense of direction, we ended up going the wrong way on the bus, so by the time we got to our chosen hike, it was approaching 11.30. He rarely gets grumpy, but as the fifth person on the packed shuttle elbowed him in the face, I saw my placid husband start to lose his cool and mumble about ‘not being that bothered about the Grand Canyon anyway’. This obviously cheered me immensely, as I am not known for being the relaxed one of the two of us.

Of course, we made it to our hike, at the start of the South Kaibab trail, but not until about 11.30. It was really important to us to be able to see some of the canyon from beneath the rim, to get a feel for scale, which is pretty hard to do looking down from the top where your sense of perspective and size is skewed. I had to conquer my fears here, as the trails going down into the canyon are steep, busy, and with sheer drop offs at the side. There are up to 3 fatalities a year here due to people ‘falling into the canyon’, though these tend to be young men between 18 and 34, mainly trying to take selfies.

John chivvied me along, pointing out all the 8 year old children practically running up and down the trail, and our perseverance was rewarded when we reached Cedar Point, a promontory within the canyon, from where we could look all around, down and up, and marvel at how little we’d moved in relation to the overall depth. The Park Service is very clear that you are not to attempt a day hike to the canyon floor, and it’s easy to see why – at a mile deep, the number of switchbacks necessary to descend that distance would make it incredibly challenging to then hike back up in a day. There is a place called Phantom Ranch, on the canyon floor, with reservations currently full to September 2017. Perhaps one day we will work up to that but for now, this hike gave us the sense of scale, and relative peace, that we were seeking.

Closer to ground level, but no less breathtaking, was our visit to Antelope Canyon. This is a place I’d seen on many photographs of ‘dream destinations’ but I hadn’t realised it was even in Arizona, let alone right down the road from our campsite. It’s on the Navajo Reservation, so all visits are arranged through tour companies, but we had no problem turning up and getting a place. In the midst of Arizona’s red, rocky northern expanses, it looks nothing from above, as you tramp across desert in the midday sun, but once you descend the steep steps and ladders, down into what is known as a slot canyon, everything changes.

At the base of the canyon, everything is cool, and in the narrow slot that travels 400m through earth, the rocks twist and turn around you in gentle slopes. But the reason people come here, and what takes your breath away, is the colour. Or colours. From the red desert above, the colours below become yellow, orange, pink, purple, and even blue. I’ve never seen anything like it, and it’s fascinating just to stare at the rainbow that surrounds you. Our guide showed us how to take photos on our iPhones, and even for amateurs, the results were spectacular and really do capture the feel. If you are ever in Arizona, or you have never planned to go but now might, it’s so worth a stop. We toured the lower canyon – there is also an upper level, which apparently is more crowded. Given that we had a party of twenty, with another in front of us and another on our tail, it’s not a place for quiet contemplation, but it’s worth it just to see colours so alive underground.

It’s not all been red rocks and canyons in Arizona; we also made a stop in a couple of lovely towns on our way north – Prescott (which you must pronounce ‘Pres-kitt’) and Flagstaff, namesake of our trailer. We loved both, spending more time in Presott, stopping in Flagstaff only long enough to have a great coffee and vegetarian lunch (I know!) at Macy’s European Coffee House, where everyone seemed very relaxed and there was a chap extolling the virtues of Bernie Sanders to all who would listen. Sadly for him, his mission failed, as Clinton triumphed on Tuesday, but it certainly seemed to be a very relaxed and liberal place, nestled high up in the mountains.

Prescott is the hometown of our friendly barman in Key West (he of the $3 margaritas which lead to my pre-Christmas bicycle/chin mishap), and he made us promise to visit. So we hauled the trailer up mountains and came to a stop at Point of Rocks Campground, right next to the beautiful Watson Lake, and the Granite Dells – a fairyland of huge granite rocks that you can hike through and over for fabulous views all around.

We’d had a few weeks on the wagon, after John went a bit hard at a blues bar in Austin, TX, and given the ratio of breweries to residents in Prescott, he was ready to test out the local ale offering. We stumped for an Uber, which we’re finding really handy and cheap when we arrive in cities, and were taken into town by a radio DJ who advised us that his station is ‘the only one who’ll take advertising for the medical marijuana crowd’. There’s a crowd, we asked? Apparently Arizona has licensed marijuana for medical purposes, underlining our impression that there’s a strong liberal core in the state, and perhaps one reason why people seem so happy.

We had a great couple of days, enjoying some beer (mainly John), a decent Marlborough Sauvignon Blanc (me), and found the best burger that I have had so far at Bill’s Grill, a tip we picked up from some fellow bloggers (thank you Ryan and Rebecca). You could choose everything at Bill’s, from the bun to the sauce, and my 1/3 pounder, chargrilled, with pepper Jack cheese, pickled artichokes and banana peppers, with chipotle sauce, was epic. I rarely have burgers, but this one will go down in history for me. I also found time there to do a bit of shopping and get my hair cut (6 months on the road had left me with decent natural highlights but sorry split ends) at a place called Livy Lou’s Boutique, which felt like a huge treat having been away from my normal manicure/pedicure/facial/haircut routine at home for so long now.

Our other favourite Arizona stop was Saguaro National Park. If you think of the desert, of western movies, of the Wild West, somewhere in your mental scenery will probably stand a cactus. It will have a straight stem and two arms aloft, green and covered in prickles. And when you first drive through Texas, and New Mexico, you will think that cacti, sadly, do not really look like this, and your dreams will be in tatters. Not so in southern Arizona, and particularly around Tucson, where the National Park is alive with forests (actual forests) of giant cacti, perfectly fitting the brief, and clearly waiting for John Wayne to ride by.

I’m being light hearted, but on a serious note, when we went for a hike in the park and found ourselves surrounded by these giants, traipsing up a desert mountain, passing a saguaro every few feet, I actually had quite an emotional reaction. Being a poor planner, I had not investigated or researched Arizona before arriving here, and as a consequence was genuinely shocked and awed that these plants exist, both in size and in number. Standing beneath one, knowing we were moving on the next day, I couldn’t quite comprehend that we had happened upon them, and that this might be the only time we ever stand among these giants of the succulent world. It sounds a bit batty, a bit hippy, I know, but nevertheless, that was how I felt and how I still feel. Over a cactus.

There were, of course, other beautiful sights in Arizona, and one day we hope to return, but on our last morning in Page, a weather warning came in for 60 mph winds across the state, so being ever watchful of the trailer/wind combination, we hitched up and towed out north, into Utah, to more red rocks, more beauty, and….snow!