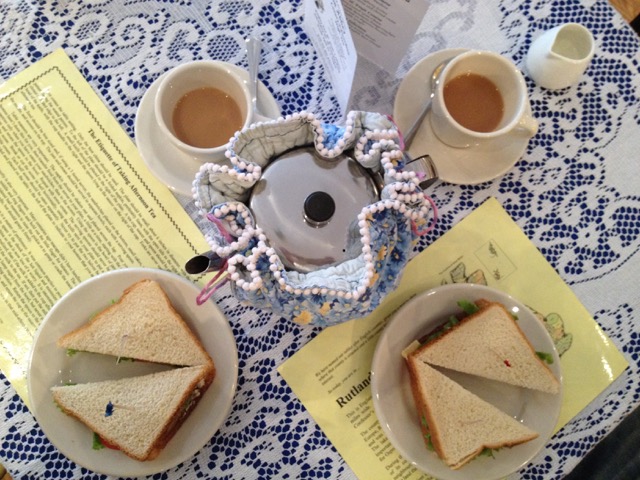 One of the best parts of this new lifestyle is waking up in the morning thinking you will have one sort of day, and then finding it turns into another sort entirely. Yesterday we woke up in St. Andrew’s State Park, near Panama City, Florida, after only one night, knowing we needed to pack up and hitch the trailer again to take it for some necessary maintenance. John had got it in to a repair shop after a last minute cancellation and this would mean we didn’t have to try and fit in this chore at a later stage. It made sense but I was still a bit grumpy at losing the uninterrupted three day stretch I thought we’d have here.

The mechanics thought they needed until about 4pm so we left it with them to go in search of lunch. A stop at a mall was uninspiring and our attempts to get a few admin jobs done were thwarted by the absence of a stationers. We needed cards and stamps as well as a diary for John, who receives from me a black Moleskin day-to-a-page diary every Christmas, in which he records faithfully his daily spending. It’s the kind of thing that really floats his boat and I’ve failed as a wife in forgetting to buy this in advance before we left the UK. We decided to head into what is labelled on the map as ‘Historic Downtown Panama City’ , dubious as to what we might find there as we passed a lot of vacant lots and run-down shopping malls. Happily, the old town proved us wrong in a number of ways.

The post office is an unexpected treasure. Service was glacial but this gave us an opportunity to wonder at what is a surprisingly beautiful building, with a wall of individual post boxes, beautifully crafted, prompting a ‘why don’t they make things like this any more?’ conversation between us. Highlights like this in places we’ve arrived in only out of necessity can really make us smile.

The main street of the old town is laid out in the classic American style, with parades of shops down each side and parking spaces at 45 degree angles to the kerb. We’ve noticed in a lot of the older towns we’ve been through that they have started to make a feature of old ‘main streets’, that have for the last couple of decades been losing out to strip malls and out of town retail parks. It’s a formula that works for us, characterised by small, independent stores, classic cinemas, interesting cafes and restaurants, and an emphasis on the history of the local area.

We couldn’t pass up the opportunity presented by Willow’s Tea Room, proudly displaying a Union Jack and the promise of ‘real English tea’. I’d been panicking earlier about our dwindling supplies of Yorkshire Tea,  so a pot for two of Yorkshire Gold, accompanied by cheese and pickle sandwiches on proper white bread, was an unexpected delight. The budget man refused my request for a box of Yorkshire Gold – $16 for 80 bags was not going to be squared off in the final days of this diary year – but he did shell out $1.99 for a real Cadbury’s Flake.

The owner of the tea room is a lady who retired here from Newmarket, near our house in Cambridge and where a number of our good friends live. The place is clearly popular and was buzzing at 2 o’clock. Classic tea room kitch in an American venue is slightly incongruous, as the buildings are so regular and modern, but we enjoyed wandering around checking out the Brit memorabilia and I was amused to see both a Charles and Diana toffee tin and a Daily Mail calendar of Kate and Wills.

A wander around more of the old town revealed no cards or diaries but we did meet a very kind and interesting man called Bobby Connor III, who started chatting to us about the local area. Bobby is proud to say that his father and grandfather both walked this street, and that now his grandson, Bobby V, is in 2nd grade here. He talked to us about the changes he’s seen, with many of the big names shops moving out of town some years back, but that now there is something of a revival in the area.

Such is Bobby’s enthusiasm for old town Panama City, he took us on an impromptu tour of his neighbourhood, showing us the marina where his daughter’s apartment is, the woods where he used to play Cowboys and Indians, and his old school, where we got talking to one of the parents doing some maintenance there over the Christmas break. He explained to us how there are only 20 children in his son’s class, and that the parents of all of them have eyes about town all the time, so there’s no ‘running wild’ and everyone feels safe. As I’ve written before, this is one of our favourite aspects of travelling this country – the openness of people and their willingness share what they love about their towns, giving us an insight into places we would not have from just following the normal tourist routes.

Sadly our time with Bobby was cut short as we had to get back to the RV place to pick up the trailer but we both agreed that the day had turned into one of our favourites, completely unexpectedly. For the practical out there, I should also report that the trailer brakes have been checked, the wheel bearings repacked, the line to the propane tank regulator replaced, and a hitch receiver added to the back for our bikes. For everyone else, I still have the pleasure of my Flake to come, probably while watching my $5 DVD of The Holiday….