The end of the road: Key West 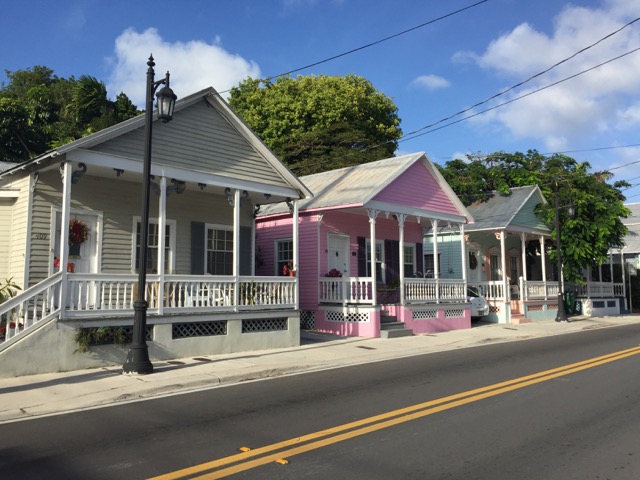 by Anna Syson in Eating, This year of our lives, Travelling 3 Comments

I’ve come to realise on this journey that John and I have two modes:

1. ‘Traveller mode’, characterised by low-key soaking up of the local surroundings, hiking, bird-watching, healthy cooking and regular exercise, keeping up with the blog, admin, laundry etc.

In Key West, which we reached after a wholesome few days in the Lower Keys (see our earlier post), it’s fair to say we went tourist to the extreme. It’s difficult not to; there are so many iconic spots, it’s busier than the other keys with lots of tourists doing the same thing, it’s not naturally beautiful (for the most part), and the happy hours are ridiculous, with seriously cheap drinks from 4 – 8 every day. As the barman at Kelly’s (where the margaritas were $3 and the beers $2) told us ‘this is a drinking town with a fishing problem’.

Unfortunately, the combination of a new bike and too many bargain basement margaritas culminated in my pitching off said bike (I blame the cruiser-style reverse pedalling brakes – what is that about?!) to chin-plant the pavement on our first night. For the next week, full make-up was required in order to prevent our campground neighbours giving us the ‘it’s not that kind of trailer park’ look. Our campground was the most expensive to date, at over a hundred bucks a night (no discounts), but we decided it was worth it to be close to the action and it was the right call. Having learned my lesson, the bikes were great, as we could nip from our site (Boyd’s) into the thick of things in about 20 minutes.  John hired his bike from a place called We Cycle and the guys there (including weirdly a man from Solihull) couldn’t have been more helpful.

Back on the tourist trail, we had our friend Steve’s instruction ringing in our ears “Make sure you touch the bouy and get a photo” so one of our first tourist tasks was to hit up the Southernmost Point Buoy. This iconic striped marker is positioned at the corner of two residential streets and marks the most southerly point of the US.  As we cycled round the corner, we saw an obvious flaw in attempting this in the week before Christmas. The street was crowded with so many people also with this target in mind, and a long queue snaked down the side walk. At the marker, people were taking turns for quick photos with the buoy. Full-on-tourist-mode aside, we did not want to lose our afternoon on this pursuit, so we satisfied ourselves with getting a good look and taking a selfie with a big crowd behind us, before heading off (probably to another bar..!).

One of our favourite drinking holes was the Green Parrot, which was recommended to us as a good music spot, and was a really chilled place to spend an evening. We realised that somehow in our 6 years together, we have never played each other at pool, and quickly discovered why, as we are both terrible! We also lost some dollars playing the Walking Dead pinball machine, which despite this was pretty exciting as we’ve recently got into this show – particularly atmospheric when you’re huddled in a trailer in a deserted campsite in rural Georgia.

Some other interesting spots we discovered included a large outdoor memorial to the Island’s 1,000 plus victims of AIDS, Hemingway’s house, and an African cemetery, which is a marker for the remains of 294 Africans who died on Key West, having been rescued in 1860 from slave ships. 1400 were rescued but not all survived, due to the poor conditions they had been kept in on the slave ships. In the end, over 1000 of them returned to Africa, though to Liberia rather than their own home countries. Some thoughtful moments in the midst of all the craziness on offer here.

We also found the Mile 0 marker, which denotes the end of US 1, the highway stretching from Maine down to Key West and connecting most major cities on the East Coast. It’s weird to know we won’t be driving any further south on this, and there was no one else there when we came across it, apart from a local man with a dog who offered to take our picture and told us to check out sunset and music at Mallory Square.

Mallory Square at sunset was too touristy, even for us. It’s a great spot for a sunset, right on the west of the island, and there are lots of street performers and musicians, which is fun, but having come from ‘relaxed traveller mode’ at Bahia Honda, and recalling our sleepy sunsets from further up the Gulf Coast, we decided we’d found better places to relax in front of a pink sky.  We headed for another bar, which attracted John with its name ‘Shots and Giggles’ and where we got into a bit of a political conversation when our bar tender admitted that she had some grudging respect for Trump. We’re following the Republican nomination race with keen interest and have been asked a lot by friends at home what it is that’s keeping Trump in the race.

This is a travel blog, not a political forum and I’m not looking to judge or be judged here so, purely for the record, I will outline her point of view as she explained it to us. I think this is worth hearing as it may go some way to explaining what, to some of us, may seem inexplicable. In her twenties, she has lived her life feeling safe as an American and now she perceives a lot of uncertainty. She feels threatened by terrorism and she feels her economy is in a mess. Trump, it seems, provides what she and some (many?) other Americans want – firm, simple sounding answers to the problems that are keeping them up at night, which he expresses in plain English:  “Too many Mexicans draining money from the system? I’ll build a wall!” “Too many Muslims committing acts of terror? I’ll ban them all!” “Not enough money in the economy? I’ll make more!” ‘Easy’ answers to complex problems, and she likes that idea. We move on before the old British adage of never discussing religion and politics bites us in the rear…

On to less controversial topics, the best food we had on Key West by far was at the Cuban sandwich and burger shack, Frita’s Cubanos, which John spotted on one of our walk about, attracted, unsurprisingly, by a sign pointing inside for ‘burgers and shakes’. At the end of a long day touristing, we sat outside in the balmy night and ate a Cuban burger (John) and fish tacos with plantain (me). We got chatting to the chef as he made them, in a trailer parked on the patio. Originally from Maryland, he moved here some years ago and has never left, particularly enjoying the off season, when tourists avoid the tropical storms that threaten the island. The Key West hurricane plan, he told us,  is to ‘fill the bath with ice and stick in as many beers in as you can’. We can roll with that.

We came across a lot of people in Key West who had moved here and never left. There are salty old sea-dogs who have retired to the sun, musicians and artists enjoying the anything-goes culture, and a mixture of the very rich and the very poor, all seemingly bonded as a community. Evangelical in their love for this tiny outpost of the US, closer to Cuba than it is to the mainland United States, and combined with a hard core of folks who were born and brought up there, they reminded me of my parents and their friends in Penzance. It must be something born of living in the most southerly reaches of a country, hard to reach but well worth the effort, a spot where the tourist season is full-on and off season is dead.  The daughter of a Scillonian, I felt oddly at home.

Having enjoyed our Cuban street food, we snapped up some Key Lime pie from the well-known Kermit’s, before collecting our bikes. We decided to go back via the bouy and, to our delight, found that we and a family of four were the only people there. After some reciprocal photo taking, we ended our tour of this fun and crazy island with our picture at the Southernmost point, which we hope Steve will be pleased to see in all its glory below!