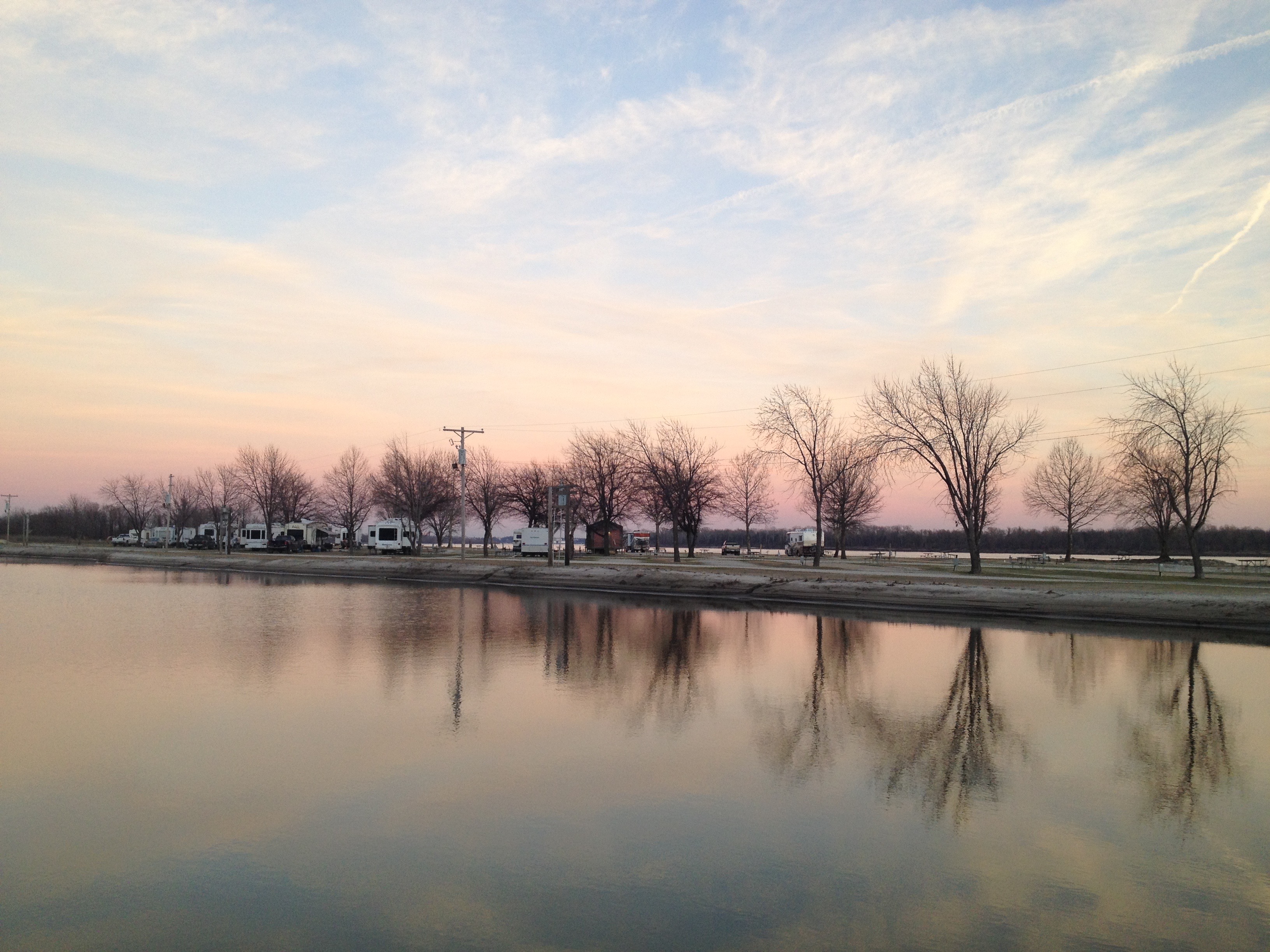 So we left Nashville in snow, returned to Mississippi in time for a tornado, and in the meantime, got sick. Things were not all rhinestones and cowboys at Camp Syson. We decided to head north, to Memphis and the Delta Blues trail, as Nashville had fired our taste for music history and some of John’s greatest musical heroes, like Muddy Waters, Howlin’ Wolf and John Lee Hooker, have their musical roots in northern Mississippi.

After a long road-trip, during which John played me what he termed ‘appropriate music’ (mostly an excuse, it seems, to plug in Bob Dylan’s back catalogue), things perked up when we reached our campground on the outskirts of Memphis, just over the Arkansas border. Our spot was right on the banks of Old Man River himself – the Mississippi. There was excellent wifi, a free laundry room, and the greatest river view I could have hoped for, with enormous barges going up and down, carrying loads of coal and who knows what else. I could sit and watch the scene for hours, and I knew my Pa would love it too.

Day one in Memphis we decided to prioritise the National Civil Rights Museum. We’re glad we did – it’s an intense and utterly engrossing museum chronicling the civil rights struggle in America from slavery to the present day. We ended up getting kicked out before we’d even finished seeing everything. What really took my breath away was that it is built behind the facade of the Lorraine Motel, where Martin Luther King Jr. was shot and killed in April 1968 while standing outside his room.  The balcony on which he was standing is right there when you walk up and when we’d been round the museum we found ourselves in a glass corridor looking into room 306, directly behind the balcony doors. I found it surprisingly moving.

Day two in Memphis I had to call in sick. We were both feeling rough and could no longer pretend that we could tourist on, so we extended our stay at the campsite and took the day off. Well, I took the day off. John, of course, realised he now had a perfect excuse to ‘get on with a few things’ and managed to fill the whole day with various chores. This is how he relaxes. I, meanwhile, FaceTimed my folks, caught up on some admin, drank a lot of tea and ate soup. Rock and roll.

By the morning we were ready to meet the King, and things got way more rock and roll at Graceland. I have always wanted to go, John probably not so much (Elvis isn’t ‘cool and unknown’ enough for him) but it turned out we both loved the experience. As a house, Graceland is a lot smaller and less showy than you might expect. Yes, Elvis splashed a lot of cash on some horrific 70s decor, but it really feels like a place filled with love and I couldn’t help but be pleased for him that he’d been able to take his parents from the tiny shotgun shack we saw in Tupelo and make this home for them all.

The afternoon and evening of Day Three were reserved for John’s dream destination – Clarksdale, MS, home of many musical legends and site of the Delta Blues Museum. Clarksdale is not a fancy place and going from Graceland to there in a matter of hours rammed home what we’d learned from Day One: The Mississippi Delta is a place where people lived hard, and likely still do.

The Delta Blues Museum explained to me the uniqueness of this particular genre of music. The Delta area was farmed by black slaves and then the families of those slaves who, up until mechanisation in the 1950s, were working the cotton plantations by hand, living in strong but isolated communities, largely ignored by the white landowners. Few people moved around and fewer people still passed through the area; there was no reason to, it wasn’t on the way anywhere. Families continued musical styles that had roots in their African heritage, unexposed to other forms of music, and so the music they made was localised and uninfluenced by outside trends. Now, when I listen to John’s blues collection, I will  be able to picture where these sounds came from and put them in some kind of context, which for me makes them more compelling.

Clarksdale is a small town and, although in many parts it is run down, it has the feel of somewhere on the up. We met an Australian couple who have just opened a restaurant (Levons) on the site of an old drugstore. Mains were priced between $15 and $20 and they were testing out a new ‘cheese plate’ option, with European cheeses. This felt like a world away from the local food we’d enjoyed at lunchtime on our visit to Larry’s Hot Tamales, housed in an unassuming brick building at a run-down crossroads – 6 Tamales and two Cokes for eight bucks.

The Aussies gave us some tips on what to do for the afternoon and on their advice we drove out of town a few miles to The Shack Up Inn to see the old plantation shacks that are now run as B&B units, and listen to some early evening music before the real deal got going back in town. It struck us as a sanitised version of the old town; the kind of place you come and stay if you don’t want your Delta Blues experience to be too ugly, but you like the idea of sitting on the porch of a shack, drinking a beer and watching the sun go down. We did this and it was very pleasant, and then went inside for some food, which we ate while listening to what John describes as  ‘some old country blues’ – one man, his guitar, very mellow.

I could tell that John was itching for something a bit rougher around the edges and for some music he could really get into. I could see why. The Inn was decorated with a miscellany of old farming, bar and music paraphernalia, to produce the kind of ‘old, run-down kinda place’ effect that can only be achieved at significant cost, and a lot of sourcing on E-Bay. The music was nice, but just that.

John had been doing his research and had found a juke joint in Clarksdale called Red’s Blues Bar, which the Aussie couple had confirmed would have a band on that night, so he voted we head there for the start of the show (10pm). My body was screaming ‘No! Go home to bed, you’re still ill!’ but obviously my heart was looking at my husband and knowing that this, of all places, was the one I had to push on through for. So we headed back into town, pulled up on another run-down street, and walked along to a building with blacked-out windows and a door that looked like it was permanently boarded up. “Don’t worry”, said John cheerfully, “I’ve been told it looks like it’s closed all the time”.

Inside, Red’s was indeed bathed in a red glow and I was confident we’d arrived somewhere ‘grittier’, for want of a better word. The ceiling was a mixture of old ceiling tiles and plastic sheeting. The floor was covered in a carpet that smelled of damp and stale cigarettes. The bar only took cash, had no change, and the barman pulled the beers out of an icebox, with prices written on a white board behind him. I’d been warned not to use the bathrooms, so sipped slowly on my one Corona.

We took stools in front of the window. Behind us was an assortment of all manner of crap: A microwave, random tinned goods, old Christmas decorations, plastic bags, boxes, paper plates. The crowd was a mixture, of locals, who greeted the barman and the band with mutual appreciation, and of folks who came in, like us, with expressions on their faces that said ‘Really, is this the best gig in town?’. We got our answer as soon as the band started to play. It really was.

John tells me the music was electric blues, of the kind that developed as Muddy Waters and others left the Delta and travelled to Chicago, and somehow this felt more realistic. Music moves on, as the combination of time, society and geography has moved on. Bill ‘Howl-N-Madd’ Perry, on his guitar, at times donning a crown and accompanied by his daughter, wearing spangly leggings and playing a keyboard, are what you will find if you go in search of Mississippi blues in 2016. I would say it’s worth the visit. Especially if you’re feeling a bit blue yourself.