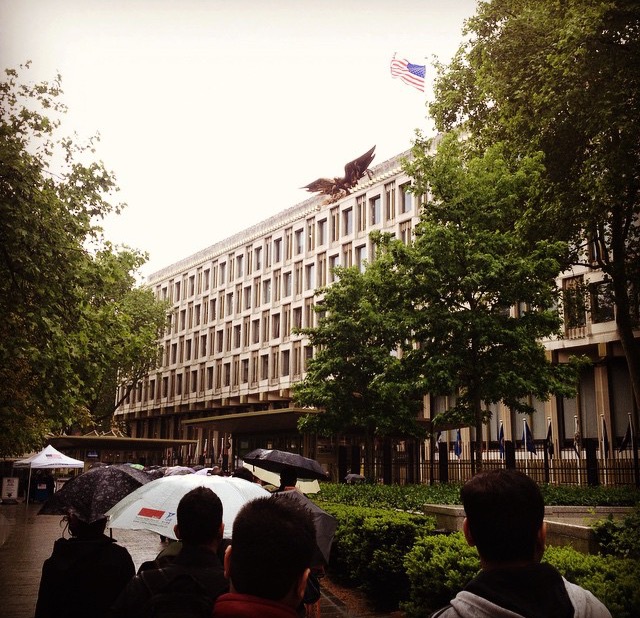 Step one in planning any visit to the US is getting your visa straight. Previously we’ve always used the ESTA  scheme – applied for and paid for online, as we’ve normally been on short holidays. Our lovely friends who have trodden this path before us put us on to the need to request a different kind, which would allow us in theory to be admitted to the country and potentially stay for longer than the 3 month maximum normally given for holiday visits. For this, we needed to firstly apply online, then go in person to the US embassy in London.

At the embassy, we queued outside in the rain, before moving inside to an Argos style hall, where we waited for our number to flash up on the screen. There was then a short interview at a counter, followed by more Argos bingo, and then a further interview, where the bemused American official tried to get her head around our employers giving us a year off (this is a bizarre concept for Americans – as our friend here tells us, ‘sure you can have a year off, it’s called being unemployed’!).

In the end, satisfied with our explanation, she agreed to a ten-year, multiple entry tourist visa. “But”, she advised us, “it will still be up to US immigration when you land as to how long they stamp your passport and they won’t give you more than 6 months I don’t think”.

Fast forward 5 months and we are waiting in another line, nervous and overtired after our flight from Heathrow. This is Washington Dulles airport and we are waiting to speak to the first line of immigration official, visas in our sweaty palms. John removes his Panama and asks, in his most polite and deferential British voice, whether it might be possible for us to discuss a stay of up to a year. The official eyes us quizzically, and retorts that this is above his pay grade, but that he will write something on our papers and we can see someone else.

We shuffle off, both unsure as to what to do next, but getting our bags seems the sensible thing as we’ve seen the three red plastic monstrosities circling the carousel for an hour and they’ve now been dumped in a corner by a hefty looking female official. We collect them on to a trolley, and wheel off towards where we hope the next step will take place – Zone B.

At Zone B we approach the desk, and another official – Officer Gill – instructs us to abandon our luggage towards the back of the room and join another Argos type arrangement of seats, mostly filled with elderly Hispanic men. He takes our passports and we sit, nervously, watching bags get searched in a nearby room. At this point I start sweating that perhaps the 180 Yorkshire teabags were not a good idea. When we get called, Officer Gill’s pronunciation of our surname causes most of the gentlemen around us to rise before us, thus earning us a stern wave from the man himself.

We approach the desk again, John brandishing his laminated folder full of our evidence that we make good prospects for a year’s stay. Office Gill, miraculously, agrees, and within minutes stamps us for a year, also telling us he will make a note that we may wish to travel to Canada and the Caribbean, in case of later question. His only word of warning to us: “I don’t have a problem with you being here, just don’t go broke”. Wise words, Officer Gill, and ones that will come to mean more in later experiences. This is not in any way the land of the free. But more on that another day.

In summary, our recommendations if you want to stay in this country for a longer than normal holiday, remember the following:-

I nearly cried when he stamped us for a year. In that one moment he made our dream a reality and all the preparation we had done worth it. Officer Gill, we salute you!