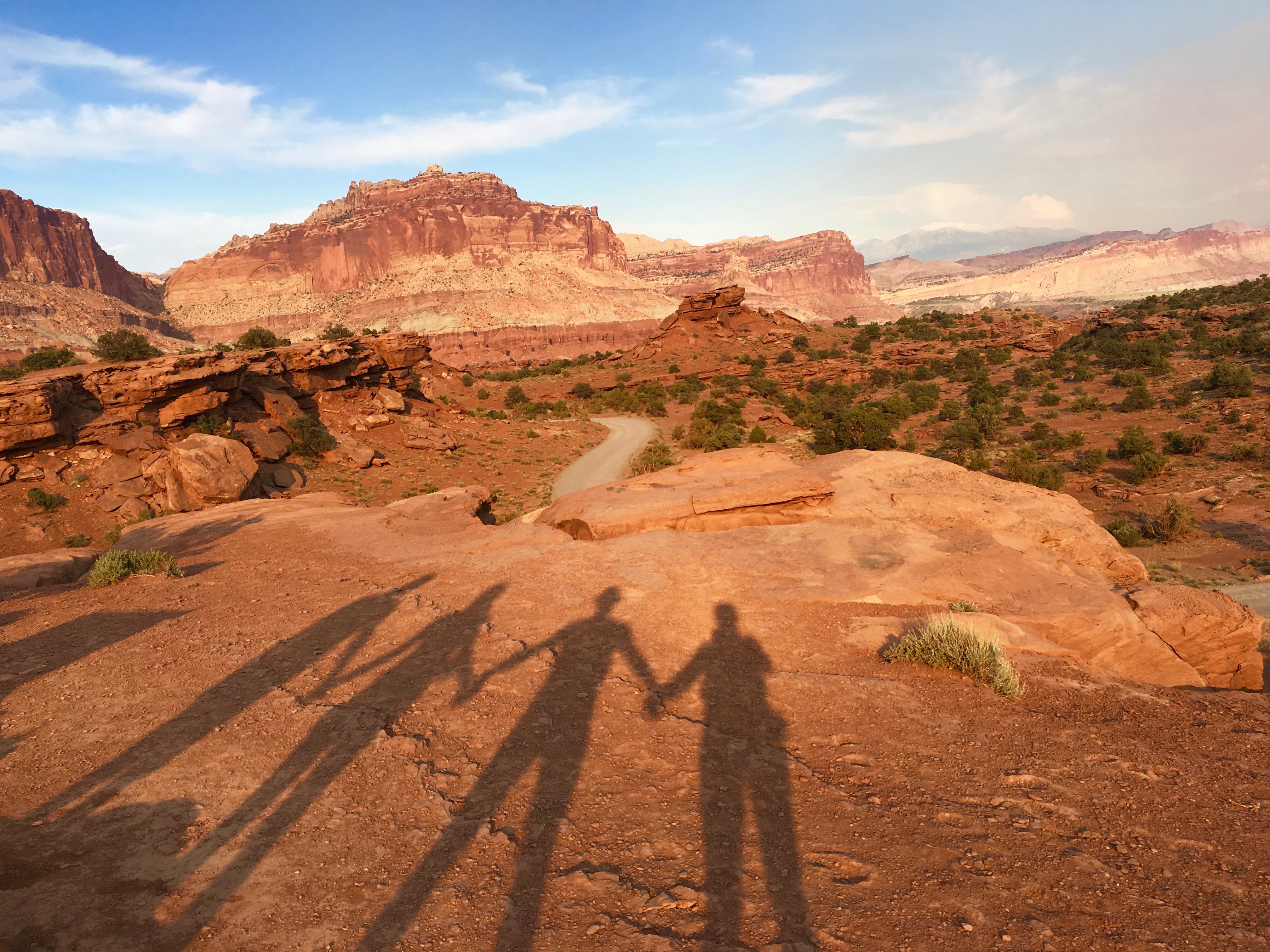 Our happiness at being back in Utah could be exceeded by only one thing: Sharing it with our good friends, Tina and Tom.  In the UK, stepping into their house always feels like coming home, so to know we were driving two hundred miles from our new set up in Torrey to collect them from Salt Lake City airport and bring them back to our little house on wheels meant a very exciting drive for us.

It turned out to be more exciting than expected, as our return journey was not short on drama. The Forest Service had posted signs about a prescribed burn that we had clocked on our way north, but the size of it still took our attention on the drive back to camp.  With three of us fire-watching, Tommy snapped this pic just as a bunch of elk appeared from the edge of the road. Luckily, John spotted them just in time as their white rumps came perilously close to our bumper. Welcome to Utah guys!

Morning dawned with far less drama and we were happy to be able to share the beautiful views from our new camp with our friends. This area of Utah, just outside Capitol Reef National Park, is surprisingly green, and our campground showed this side of the state perfectly. We were in a great place to explore the National Park, and the wider Grand Staircase Escalante National Monument (a massive tract of land protected by the Bureau of Land Management, with landscapes to rival any park we’ve seen), and we packed miles of adventures into each day before collapsing into camp chairs around the fire every evening.

Hiking in the desert and at altitude (mostly all around 7,000 feet) was a baptism of fire for our new arrivals, but they threw themselves into it with gusto as we explored our fifth of the Big Five parks, guzzling water, slapping on suncream, and cooling off in rivers whenever we got the chance. This tends to be how John and I spend a lot of our days but even we found the relentless sun and thinner air challenging. Fortunately the views made up for it and we balanced walks with some scenic drives, from the comfort of the air conditioned Yukon.

It wasn’t all wholesome hiking and hydrating, we certainly ate and drank well in this part of Utah. John had decided we needed a cooler while we were in Moab (back-pack picnics in 100 degree heat are not tasty), so we loaded this up with food and water in the day, and with beer and champagne (a luxury gift from our guests) by night. The cooler itself could be the subject of a post, such is our love for it, but we’ll save Yeti tales for another day.

We found ourselves returning twice to a great little spot in Boulder, called the Burr Trail Grill, which served spectacular burgers (my Thai burger was one of the best of my life), as well as an unmissable Whiskey Pie – homemade, melt-in-the-mouth pastry, filled with a deliciously light but heavily spiked Bourbon chocolate mousse. Oh. MY! We had huge Porterhouse steaks at a ranch in Torrey, as well as a breakfast of omelettes with home-grown veg at the Capitol Reef Cafe. Other than its strange licensing laws (don’t go asking for a glass of wine bigger than 125ml or try to rebel by ordering two), Utah exceeded our expectations on the restaurant front.

Capitol Reef is the most low key of Utah’s parks, but no less spectacular for it; its rock formations and dirt roads provided plenty of wow moments. One of our favourite days was spent exploring the Burr Trail – a partially paved, mostly dirt road, which winds down switchbacks from the town of Boulder in Grand Staircase NM, back into Capitol Reef. En route, we found a slot canyon, a narrow gap in the soaring red rock, which helped us feel even tinier in relation to the giant landscape around us.

When we reached the switchbacks, we all gulped as John parked up beside a yellow sign warning of 12% grade for the next mile. Taking the opportunity to get out and enjoy our last moments of relaxation, we stared out at the descent, and the breathtaking landscape laid out before us. I joke about red rocks a lot but Utah is actually full of so many colours, it’s a rainbow at every turn.

The Yukon lapped up the dirt switchbacks and we made it to the valley floor all in one piece but knowing we still had a very long drive back to camp. The scale of America’s roads is something we’ve now become used to, but on deserted dirt roads there is still a small frisson of fear that this might all go horribly wrong – do we have enough water, could we change a tyre, where’s the nearest phone signal?!  Though the miles were relatively few, the dirt road meant that it was a good couple of hours before we were in the pool cooling off at our site, reliving the day with the comfort of an ice cold G&T.

Much as we love the red rocks, a change of scenery was in order when the heat was at its peak, so we headed to Fish Lake, which a lady in the loo had recommended to Tina as being ‘just like Lake Tahoe’. Suffice to say, it was nothing like Lake Tahoe, and led to us dubbing it Lake Taco, but we did have a cool and relaxing day floating around it on a pontoon boat – a little too cool for Tommy when an unexpected wave caught him mid-Leo pose up front! We watched pelicans and osprey, and relaxed in the sun, mountains in the background, toes occasionally braving the snow melt water – Lake Taco had been under ice only 3 weeks before.

I realise I’ve probably said a few times how special it was to share Utah with these guys. The state really has been one of the highlights of our trip, it’s given us so many memories to take with us, and to know that two of our closest friends will also have those pictures in their minds is really precious to us. We all agreed that our stand out moment was when we rounded a corner on the Burr trail to see this huge, rainbow landscape laid out before us. Sitting side by side and gazing on layer upon layer of coloured rock, we felt like we were floating above a different world.

Tina and Tommy took these memories (and a good dusting of red sand) with them to Mexico, where they enjoyed some well-earned beach days, but before they did they treated us to a night in a fancy hotel in Salt Lake, which had (you guessed it) a bath, so I was in heaven, as well as a free drinks reception for guests and a giant Scrabble board to our delight – we know how to rock and roll! We then had a few hundred miles to cover in a couple of days, to set up camp in Idaho and pick up our final visitor of the year, John’s Dad, who was to join us to live out one of his own dreams, and ours – seeing Yellowstone National Park…