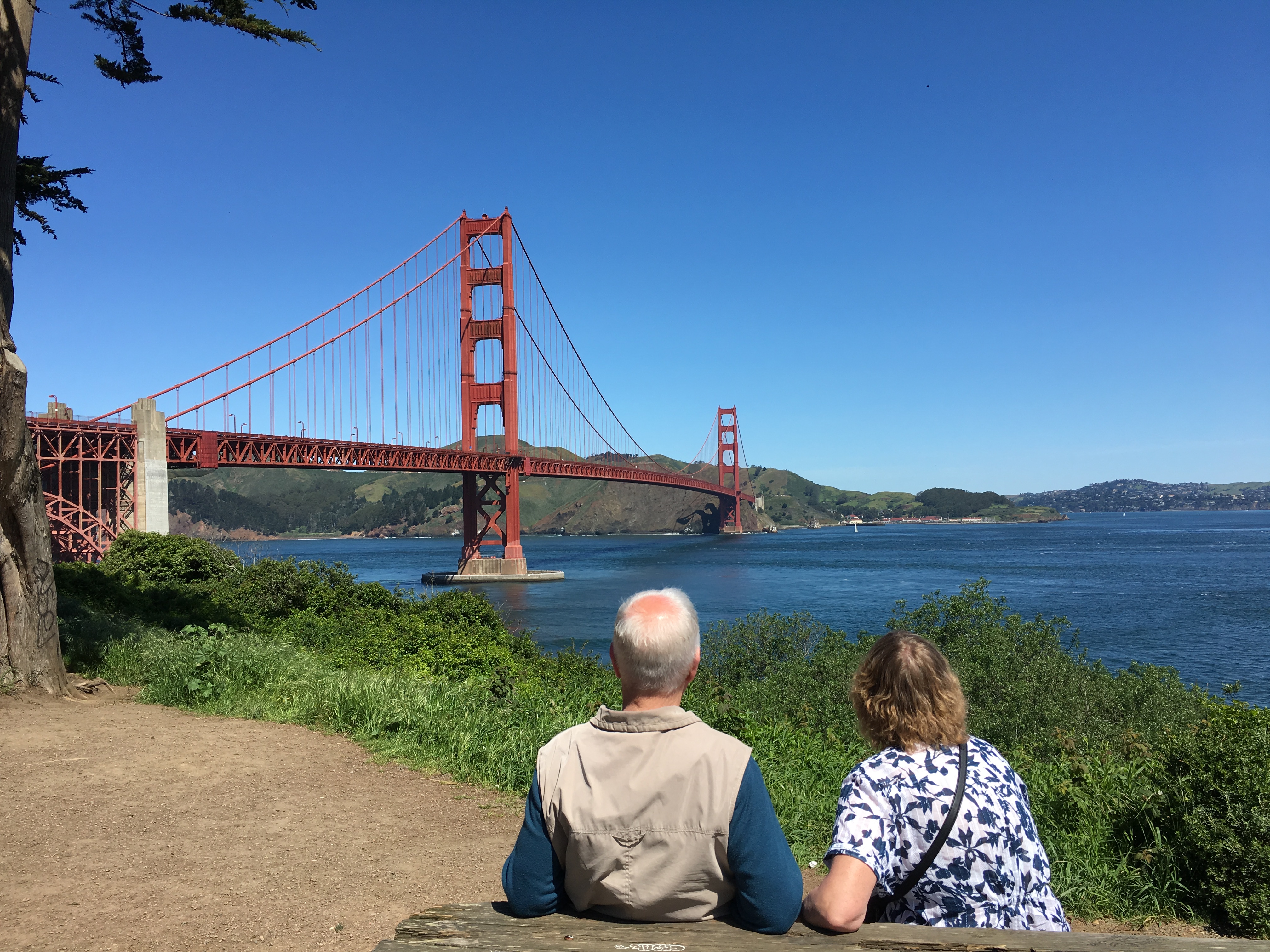 by Anna Syson in Beer, Eating, This year of our lives, Travelling 1 Comment

When we said we would be in the US for a year  a number of our friends and family feigned weakness at the idea of being apart. What this really meant was ‘Can we come visit you in California?’! Great with us, we love sharing this time with people we love (and it gets them out of having to look at ALL our photos when we get back….). What it also meant was that we would return to San Francisco, Golden Gate to the Golden State (and hub airport), more times than we might have expected during April and May, with Carly and Erin, with my folks, and with John’s sister Lorna and her husband Neil. As it turned out, this was certainly no hardship, it’s one of our favourite cities to date.

Here are our highlights of a city that never fails to amaze, one that could hold our interest for a lifetime and in which, if you visit, you will find your own special places. We were on a bit of a budget, of course, so many of these activities are cheap or free, and these were our favourites:

The Golden Gate Recreation Area. This  is part of the National Park Service, and therefore close to our hearts. There is, however, so much more to enjoy than first meets the eye, I could happily spend days just on, around, and under the famous bridge. Crissy Fields, on the San Fran side of the bridge, is a beautiful walk or hike, and leads to a beach right on the edge of the bay. There’s a cafe, which serves lovely lunches, albeit slowly, and when we were there in April the wildflowers were in full bloom.  We walked across the bridge with my folks, great views both into the bay and out to the Pacific,  and of course we biked across with Carly and Erin, which was one of our favourite activities. Wind in your hair, soaring red bridge all around you, the charming Sausolito as a reward, and then a ferry back to the city. Bike hire is $25 all day and the ferry is only a few dollars with a clipper card. Not to be missed.

On the Sausolito side is Marin Heights. This was a hidden gem we learned about through visiting Lorna’s client in Tiburon, an experience in itself, seeing the kind of house people live in when they can afford a view of the Golden Gate Bridge and yet are friendly enough to offer you tea and biscuits and chats to you while they stack the dishwasher. They loved Lorna’s textile chandelier, which echoes the fields of sea kelp they have visited while diving the local waters, and it showed in their faces. Precious times for us as a family – she flies the banner for artistic talent! See more of her bespoke work at http://structuraltextiles.co.uk

Anyway, Marin Heights. We started a hike there, the other side of the Golden Gate Bridge, in fog, not thinking much in general. Soon, though, we started to see birds of all types, including scrub jays and humming birds. We met a couple hiking up and they told us to head down to the beach, so down we trekked and, to our amazement, a perfect view of under the bridge, and a tree swing! While you might imagine that spending a year travelling puts you in the know for these kind of things, it’s genuinely rare to be in such a tourist hot spot and come across something so cool that you’d no idea was there. We spent quite some time taking turns on the swing and marvelling at this neat feature right there in sight of the big red bridge.

Also on in the Bay is Alcatraz Island. Impossible to miss, in my opinion, and I’ve been twice. Yes, it’s touristy – it’s a National Park and possibly one of the most famous prisons ever built, but there’s something atmospheric to it, which will draw you in. While we were there they had an exhibition featuring photos of some of the oldest prisoners in the federal system, which was thought provoking. Should a black man in his 80s still be locked up now, given his ‘crime’ took place in the segregated and blatantly unjust Alabama of the 1960s? Food for thought. But on a cheerier note (!), you will learn about the inner workings of the prison, escape attempts, and even see some birds – the snowy egrets had us laughing with their throaty chuckling. The night tour is particularly cool, as you’re the last ones on the island so it’s got a spooky vibe, but book in advance as these sell out fast. Incidentally, we nearly missed the boat (literally) as we turned up the day after John had in fact booked. Fortunately a kind ranger saw his terrified face at the prospect of admitting this to his wife and sister, took pity, and promptly got us on a boat!

Back in the city, the cablecars are an experience. In theory it’s $7 a ride, but we found that with our Clipper cards, which got us on most public transport, we rode for free a lot because the machines were always broken on board. Ride up from the Market turnaround table and either get off at Lombard (the world’s wonkiest street) or carry on and over for great views of the Bay and Alcatraz. It’s not the cheapest way to get around but it’s hard to feel more San Fran than when you’re hanging off the side of a car as it’s whizzing down the huge hills.

A good friend who lived in San Francisco told us about some of the Diego Rivera frescos that you can see for free, if you know where to find them. The easiest one for us that day was in the San Francisco Art Institute, where you can also see works by the students hanging around a beautiful mission-style courtyard. Definitely worth stopping by.

Our other favourite stop in the city is Pier 39, where a colony of sea lions have made their home. Stroll on down after you’ve escaped Alcatraz and see hundreds of these characterful creatures basking, napping and scrapping. Entertaining, and free.

With my folks, we stayed near Golden Gate Park, and decided to explore one morning. We were unprepared for how vast and beautiful it is, and how much there is to do. There seem to be specials each day for free entry to various features around the park, like the botanic gardens or the art museum, but on our day we stumbled across the Japanese Tea Garden. We were lucky to bump into Ted, a volunteer with City Guides, who told us he was en route there and that if we wanted to join him at 1pm, he was starting a free tour. My Dad isn’t normally into guided tours, but this changed his mind. Ted was incredibly knowledgeable and made what is already a beautiful place even richer, explaining the history, the plants, and the reasons for their planting. City guides offer lots of other free tours too, check out their website at http://www.sfcityguides.org .

There’s so much else to do in and around the city, I could write for days. Just wandering around is a pleasure, looking at the colourful homes, gawping at the soaring hills. There’s a huge variety of food, from Japanese to Italian, Korean to Mexican (The Mission District is great for tacos), and even some good ale – John found his best real ale to date in a hipster bar in Haight and Ashbury (hard to say no, it was his birthday…), so there is something for everyone. We even found the most authentic ‘English pub’ so far after exploring Muir Woods National Park with my folks on their last day. After a walk around the giant redwoods, we stopped for some lunch, to find ourselves transported to a summer’s day in an English pub garden, and the inside was even better.

We’re fortunate to have made so many happy memories here with our family and friends and yet we feel like we just scratched the surface of this awesome city. Now we just need to figure out how to get a green card…!