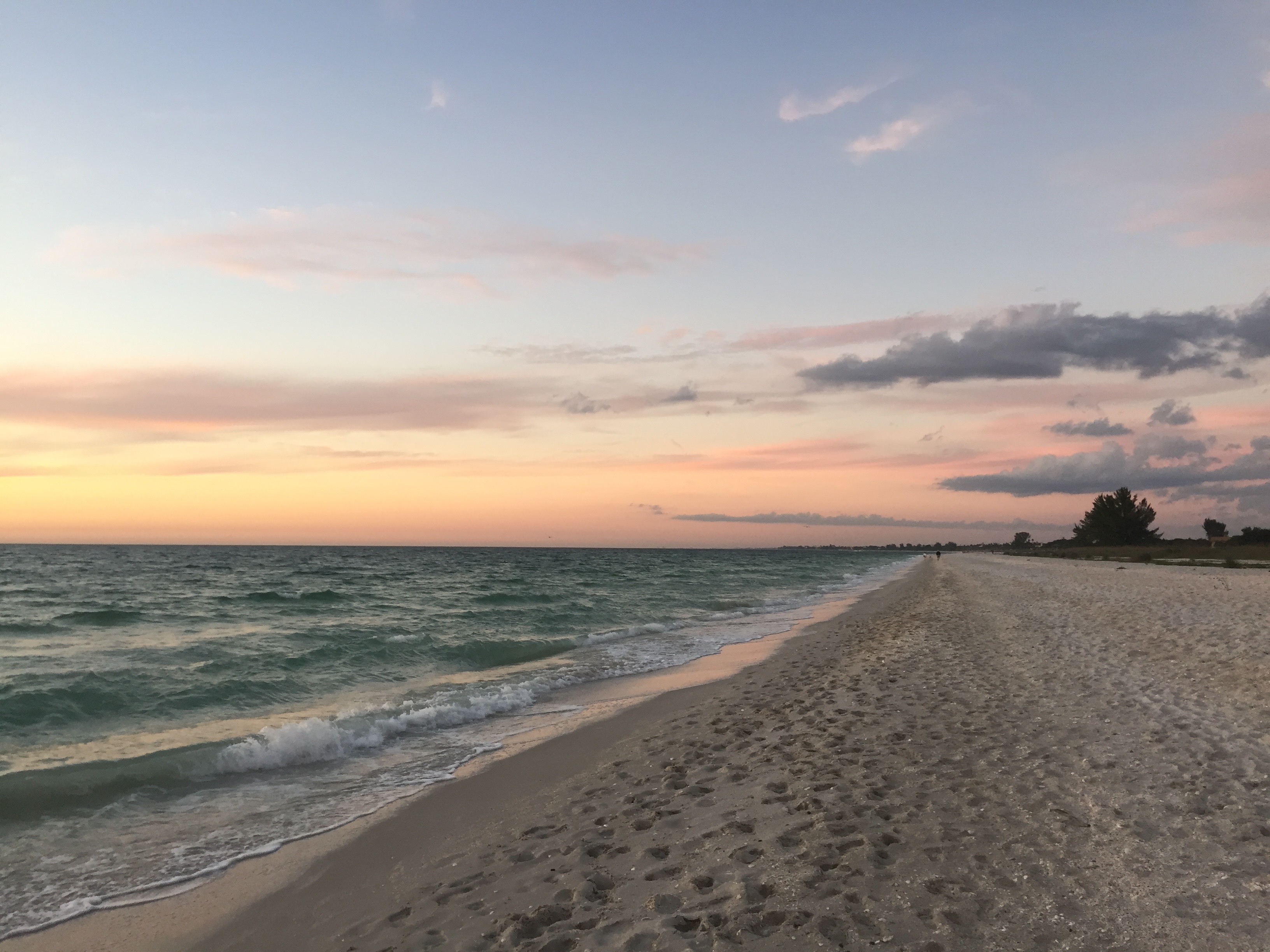 “There’s a charm bracelet of keys lying off the west coast of Florida. If you had your seven-league boots on, you could step from Longboat to Lido, from Lido to Siesta, from Siesta to Casey”.

So writes Stephen King, in one of my favourite of his books, Duma Key; an unnerving but engrossing tale of voodoo on a fictional Florida island. The book is what first piqued my interest in the Keys, but until John was reading up on the area surrounding Oscar Scherer State Park, near Sarasota, I had wrongly assumed that Mr. King was  referring to ‘THE Florida Keys’, down to the south-west, where I had in my mind that when we visited, I would relive the descriptions that had sparked my desire to see the islands.

In fact, I arrived in my dream land much earlier than anticipated, as it turns out that the writer has a holiday home on Casey Key, just off the west coast of Florida, and this is what inspired him to create the island in the book. I was therefore thrilled to find that our next campground was really close and immediately started re-reading the book on my Kindle ( I am, unashamedly, a total book worm so this counts as a big deal in my world). Being parked in a second uninspiring campsite, literally next to a road, as well as dealing with fraud on our American bank account, made the lure of a beach island all the stronger.

Our spot at the campsite was shady and private, so I got in my workouts, and we signed up for a free kayak tour along the river, guided by one of the rangers, who described the local flora and fauna. We floated right past our trailer, which was pretty neat, and got chatting to a man who has been full-time in his RV for 7 years now and who gave us his card, promising to email us his crib sheets on any areas we were interested in visiting. People are so kind in this world, and so willing to share their experiences.

The weather was hotting up, in the 80s most of the time, and this made afternoons at the beach an obvious choice. We became total beach bums and I ploughed through my book, with so many of the images described becoming much more real now that I understood the landscape and wildlife of the area. King refers often to the ‘grinding of the shells’ beneath the house in the book, and having laid on the beach, strewn with beautiful shells, I can see why these were such a big part of his narrative.

We went for lots of walks along the beach both during the day, to cool off along the water’s edge, and as the sun started to sink. Sunsets on the Gulf Coast really are mesmerising. One day I was day dreaming of a rum cocktail watching the sun set and, to my joy, we walked right in to a bar to find ourselves seated on the edge of the beach, with a great view of the sky turning pink. Our waiter, Cameron, was a fellow travel lover, so we had fun chatting to him about where he’d been and he gave us some tips on places to see next in Miami and around the rest of the country. He also makes a mean rum runner!

We absolutely fell in love with this place. John suggested that perhaps I shouldn’t include it on the blog ‘incase other people come here’. It’s not that it’s a secret, there are still lots of people around, but there is space, it’s clean and peaceful, there are lots of birds to watch, and the colours at all times of day are spectacular. It made me realise that we have very simple needs – give us a beach, a book, some sunshine and a quiet campsite, and we can be happy, perhaps indefinitely. We loved it so much that we cancelled a move to a park mid-way between here and Miami and stayed for a total of 5 nights, knowing that we would have a mammoth drive across the state at the end, but not caring as we’d found our piece of paradise. King describes Florida in the book as ”that refuge of the newly wed and the nearly dead”. Being at the younger end of that spectrum, it felt to us like another honeymoon and in a way it was, since we’d saved the money from our doomed post-wedding escape to Mauritius for this trip. It couldn’t have been more perfect, and we will return to Nokomis…