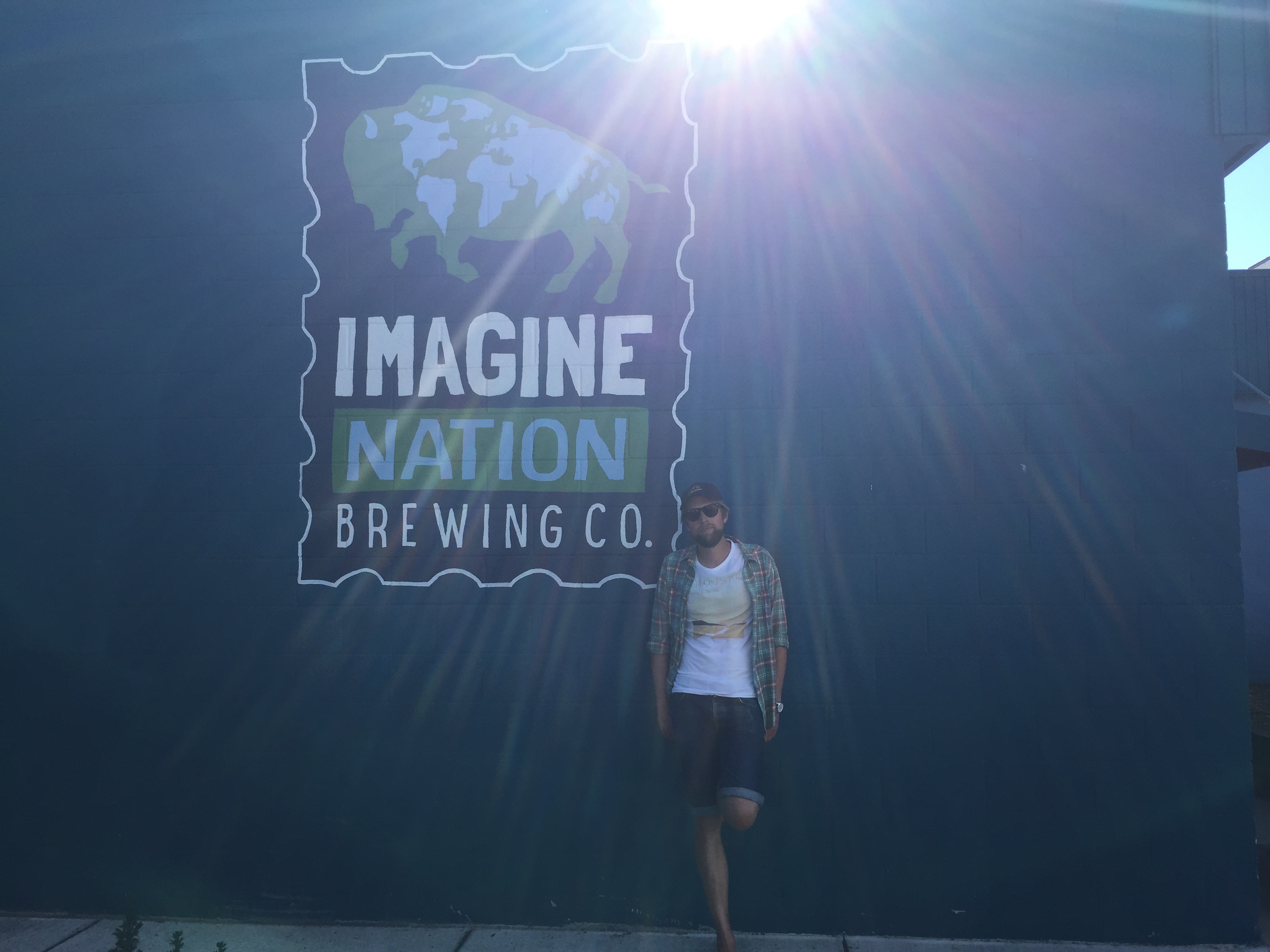 by John Syson in Beer, Eating, This year of our lives, Travelling 1 Comment

We arrived in Missoula with high hopes, it is after all our ‘home’ town (for those that don’t know we needed to set up a company to register and drive the Yukon and travel trailer and they are based on West Pine Street in Missoula). As the company is registered there we have Montana plates for the vehicles, which has led to many confused Montanans trying to have conversations with us about the best fishing near Butte or hiking near Helena only to be informed that we have no idea as we’re from the English part of Montana.

Missoula was however, a huge disappointment; rainy, cold and deeply unfriendly we couldn’t wait to strike out for Glacier and some back to nature relief.

If you’re from Missoula I’ve fulfilled my part of the deal and told everyone your town is rubbish so they won’t come and turn it into something touristy like Aspen or Jackson Hole so you can stop reading now.

Everyone else, this is the story we were asked to repeat to those we know and on this blog because Missoula has a secret which it wants to keep to those initiated few: Basically it’s the most kick-ass brilliant small town in America but it doesn’t want to share.

We began our trip at the local KOA, as the only campsite in town. Usually a KOA resembles an overpriced car park with all the associated charm. This one however was a genuinely pleasant camping experience for under $40 a night. Anna was especially relieved after another long and hot cross-country tow to find a quiet pool waiting for her. We relaxed while keeping an eye out for updates as England lost to the 4 fishermen and a volcanologist who pass for Iceland’s football team.

From there it was into town courtesy of Green Taxis. On the plus side the driver was prompt and the price reasonable but he had an unnerving habit of answering the phone, writing in a note book and looking at his iphone, often all at once while driving. Somehow we arrived safely at Imagine Nation Brewing (terrible name, great beer). Once inside we were told to ‘trust the bison’ and got a sampler of beers in a lovely carved wooden buffalo.

For those few folks that read this and actually care what the beers were like, these were chilled but not over carbonated which made them wonderfully refreshing for a hot summer’s afternoon. The description sheet we got with our buffalo taster described them as ‘Artisan Beers’, a good start although more information was given about why the beers were called what they were than what went into brewing them. Fortunately the slightly pretentious descriptions didn’t hamper the flavour. An’s favourite was the Corcovado Sparkling Summer Ale which had an interesting bitter lemon flavour while I went for a Drum Major Radical Amber, a bit darker and more malty but still lovely.

From there we walked (yes, walked in an American city) past our home street of West Pine to Draught Works, a recommendation via Facebook from some beer lovers we’d met in Portland. Although I’m not sure the beer was quite as good as Imagine Nation, the atmosphere and Thai food cart outside were amazing. I never thought two of the best Thai meals I’ve ever had would be in Idaho and Montana respectively. Beer wise, I had a pineapple IPA which was as one would expect in America – super hoppy with an almost sour aftertaste (in a good way) and An sampled a pink salt water beer which didn’t taste that much like beer but was pink and so An gave it some points for that.

While sitting at the bar we got into conversation as we often do with those sitting around us. After the inevitable ‘so you guys voted to leave the EU’ (no, not us) we discussed Missoula with our companion at the bar, Brad. It turned out he had been raised here and after retiring from the Coast Guard had returned. When I asked why someone who lives nearly 1000 miles from the coast decided to join up he replied “I got in a bit of trouble when I was younger so it was either join the Coast Guard or go to jail”. Fair enough we thought. Sticking to things nautical he asked whether we had been ‘tubing’. This apparently is the thing to do in Missoula when the weather is hot. Seemingly you need only 2 things; an old truck tyre inner tube and a lot of beer. You then ‘launch’ from somewhere upstream and float into town.

At this point the barman, Andrew, asks us if we’d like to try tubing and offered us a lift and the loan of 2 tubes the next afternoon. Despite being British and therefore programmed to politely decline all unsolicited kind offers, the sheer friendliness of Missoula as well as the number of beers we’d consumed made us say yes.

We then headed down to the surprisingly upmarket centre of town. For Missoula is no two horse backwater but thanks to the university is a small but thriving liberal town in the mould of Asheville (though less pretentious) or Prescott, two of our favourite stops thus far. An, for some reason tiring of the extensive range of breweries on offer, requested some wine and so we made our way to the delightfully named ‘Plonk’ which was as sophisticated as many a London wine bar and massively cheaper despite Boris et al’s attempts to cripple the value of the pound.

The next day found us journeying to say hello to Bennett Law, our lawyers, not as glamorous as it sounds. No major legal battles here, more the registration of our company. That company did make the whole trip possible so a box of donuts seemed a nice thank you to the guys working hard on West Pine Street.

Returning to Draught Works we were met by Andrew and followed him to a car park near to the part of the river where we would ultimately disembark the good ships tube and piled into his Silverado pick up for the trip up river. Andrew, a Californian native moved to Missoula for university and was shortly to be heading off to medical school in North Carolina in the autumn. He explained that he loved the town and Montana and wanted to share the friendliness he’d encountered both in Missoula and during a year living abroad in Israel.

We embarked at ‘Red Neck Beach’ and were soon drifting quickly downstream. We were being treated to tubing in its purest form, no giant inflatable animals, no built in coolers, no headrests. Just an old lorry inner tube and a carrier bag of beer tired round one tube. This had the pleasing effect of not only keeping the beers at river temperature but acted as a kind of sea anchor gently turning us this way and that so we could admire the river.

Like all northern rivers we have seen, the one flowing through Missoula is extremely clear enabling us to see the rocks, weeds and fish as they swept past underneath us and the valley sides as they towered above. So there we were drifting with a few dozen Missoulans down the river in the sunshine, sipping a local ale and trying not to fall off our tubes. It was one of the most unexpected times of our trip and all the more enjoyable for it.

The river had enough depth and flow to ensure we were in no danger of grounding and even had a few rapids large enough to add some excitement without actually threatening. Soon we approached our destination, an artificial ‘wave’ constructed in the river to enable surfers and kayakers to practice. Andrew had mentioned that it was cool to go over in a tube but to keep to the right channel of the river as the others were probably a bit too exciting someone piloting an old tire. We met the rapid like Lewis and Clerk descending the Snake River and somehow failed to fall off.

After scrambling out of the river, An thought it a good idea to recreate this historic battle with the rapids by having me do it again so she could photograph it for the blog (disclaimer: no other scenes have been fabricated for this blog, we’re not Top Gear you know). Unfortunately this time my old truck inner tube demonstrated the sea worthiness of an old truck inner tube and I capsized. Sadly the Yeti hat was lost overboard in the accident. Attempts to recover his body have failed. RIP Yeti hat, he’s probably being worn by a Grizzly somewhere.