A taste of luxury in Charleston 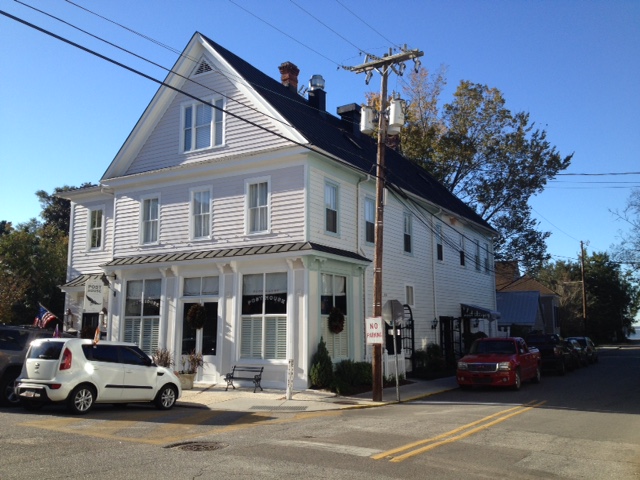 Palm trees. Period homes painted in pastel hues. Warm sunshine with a chill wind. For a moment I was back in Penzance, half expecting to see my folks pop out from a cobbled alley way. In fact John and I were wandering the intriguing streets of Downtown Charleston, falling in love with the beautiful ‘single-house’ style of the area – built at right-angles to the street, front doors opening straight on to open piazzas to catch the breeze in the heat of the summer. Balconies and columns, porches and rocking chairs, a terrace dubbed ‘Rainbow Row’ for its Caribbean colours; we were away and dreaming of a life by the sea.

I keep meaning to steer away from food facts, as I’ve had a number of comments lately that this may as well be a food blog, but I did try out the local speciality of She-Crab Soup for my lunch. Made with evaporated milk and sherry, as well as lots of delicious fresh local crab, it’s a pale pink delight, and a shade lighter calorie-wise than John’s barbecue hoagie and fries.

The previous day we’d visited Sullivan’s Island; driving across a bridge and a causeway from our campground on James Island, skies and seas bright blue all around us. After a brief stop at Poe’s Tavern (so named after the poet, who was stationed at the nearby Fort Moultrie for two years) for what may or may not have involved cheese burgers, we headed on down to see the Fort itself. Another visitor’s centre, with handy car park, and our Interagency Federal passes (good for most sites within the brilliant National Park Service) set us up for a day exploring this lovely island. The fort itself was more John’s thing than mine, lots of big guns, but I was fascinated by the exhibition in the visitor centre.

During the slave trade, ships would come into port in the area, and much of the the museum was dedicated to information on the horrors of this era. Most shocking to me was the floor plans of slave ships, with human beings chained and forced into what were effectively shelves around the perimeter of the floors, less than 3 foot high. Voyages were at least 8 weeks long, at the end of which the survivors were sold as slaves, as shown by newspaper adverts and sales invoices of the time. This was not all new information to me, but seeing the exhibits created fresh sadness that wealthy, well-educated people could do this to other human beings. For me, that backdrop provided a more meaningful context to the Civil War history lessons.

On a lighter note, a post lunch wander around the island revealed more dream homes, this time wide, white-washed wooden porches facing on to shady streets lined with American Live Oaks, their thick, twisting branches the perfect anchors for many a garden swing. A couple of blocks found us at the beach as the sun was going down (possibly enjoying carrot cake gelato from Beard Cats…)!

At dusk we returned to the visitor’s centre, only to find a huge padlocked gate greeting us. Apparently we’d both missed the numerous ‘this parking lot closes at 5pm’ signs. There was no escape for the giant Yukon, so we loaded up with the coats we had in the car, as well as grabbing the laptop, and set off on the long walk back towards the tavern, in search of a taxi number. The bartender commiserated but said that taxis weren’t the most reliable on the island and the prices to get back to our campground would be pretty steep. John, keeper of the budget ( a topic on which we have been known to disagree) announced to my complete surprise, that he thought we should try and get a nearby B&B, as we’d only have to get another taxi back to get the car in the morning anyway.

So this tale of tourist ineptitude brought us, via Crazy Carl’s cab (and his tales of getting shot at in Naples, defended by British soldiers, and fixed up in Portsmouth), to the beautiful and relaxing Old Village Post House Inn, on nearby Mount Pleasant. As this was my first shot in weeks at having a bath (at home I’m a one a day, sometimes two, kind of girl), I felt that every cloud has a silver lining.  When the lovely Noah upgraded us to the honeymoon suite, with a whirlpool bath and an antique four poster bed that even John could starfish on, I felt that someone, somewhere was smiling on us.

The next morning we retrieved the Yukon and returned to our trailer to freshen up, ready for our day in Charleston. Sullivan’s Island felt like something of a dream, but one I appreciated for the next four days in a Georgia campground without full hook-ups (and therefore enforced washroom usage for at least some of the time)!