A tale from the Tamar Valley 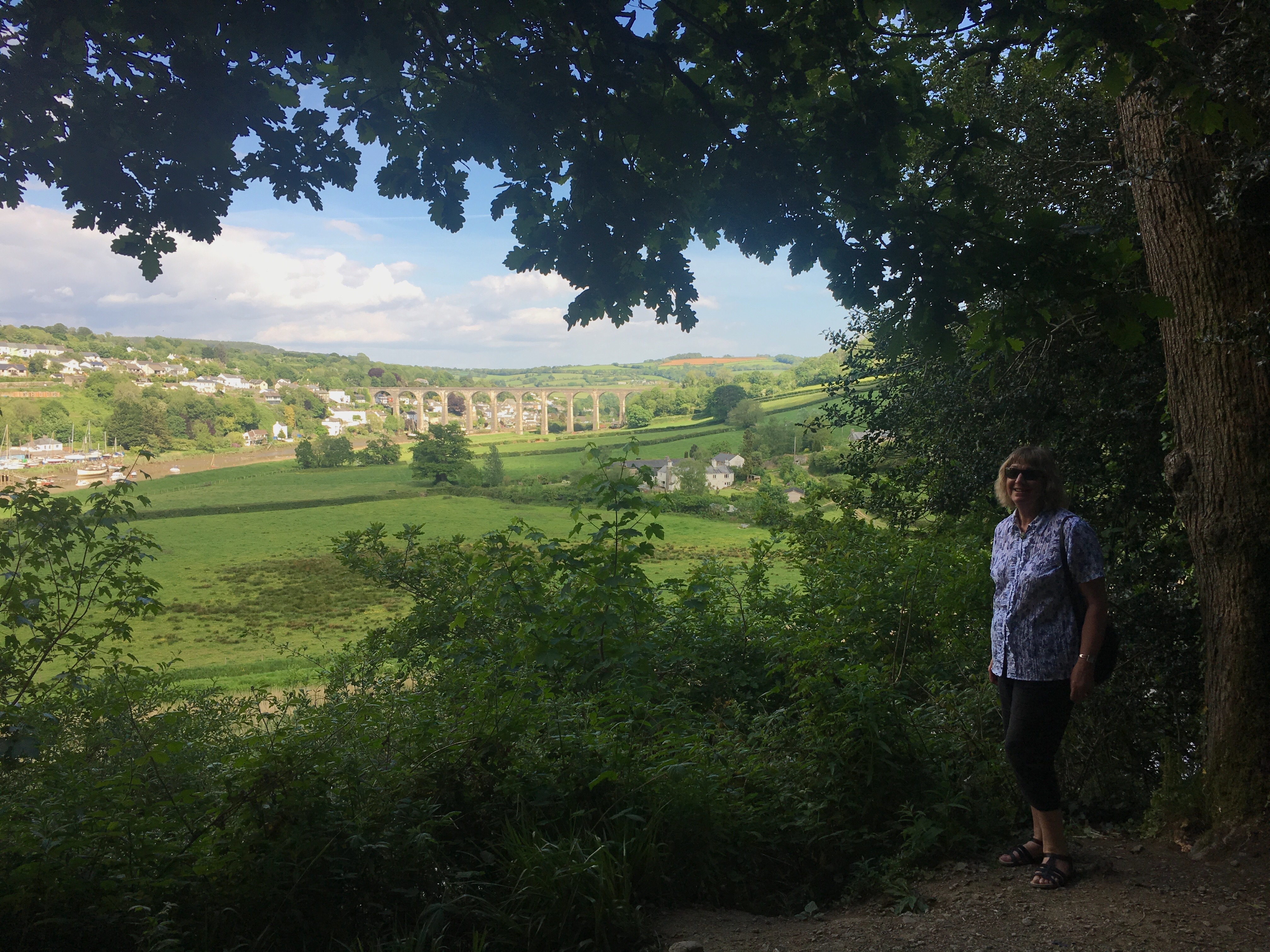 by Anna Syson in This year of our lives 6 Comments

You may remember that my Mama, wonderful and brave as she is, does not like to travel. Her Monterey guest column acknowledged that. While Pa’s unexpected passing in September roused in me the need to experience as many places as possible, in Ma it had the opposite effect. The impact, of course, was infinitely more destructive. She had lost the person with whom she most wanted to share her days; the man who would steer her gently through airports, lift her bag on to luggage racks, open the hotel room door. The fundamental difficulty, though, was that this event robbed her of the one place she had always loved most and never wanted to leave. A Taurean, an Earth sign, her home is her castle and suddenly the heart of it was gone.

In the days immediately following Pa’s death, all we could do was walk. With the early October evenings still light, we would promenade along the Prom, pace the coastal path to Newlyn and Mousehole, tramp up and around the town, trying, as he had always counselled us, to just keep putting one foot in front of the other. But there was another reason lurking under our adherence to that old adage: Ma didn’t want to go home.

The shutting of the door closed us into a silent space. He wasn’t up in his study, tapping away at the next book. He wouldn’t respond to our you-hoos, nor slowly descend the stairs, face and arms open to tales of our latest adventures. He didn’t always want to be part of them, but when the evening came, Pa loved to sit down with us and listen to the stories of the day.

This ripping away of her sanctuary prevented Ma from leaving her home for even a night in the subsequent months. The thought of returning after a long journey, knowing the house waited empty, was a thought too dark for her to bear. And yet the freedom that could be found in leaving Penzance for a few days could, I hoped, prove a worthy trade-off.

The compromise was a birthday gift of two nights away, starting and ending together in Penzance, and venturing up country to explore a place they had intended to visit together, having only months before joined the National Trust. Wanting to get away from the memories of last year’s great birthday celebrations, she was open to the idea of a brief escape. And so I find myself, albeit at summer’s end, tapping out this tale and thinking that he would have been all ears. Here you are, my Pa, another story for you: Cotehele, a Tale from the Tamar Valley.

Monday morning in Penzance, the stuff of dreams. Mount’s Bay at full spring tide, sparkling turquoise under a gleaming sun. We load up Ma’s little car in a holiday mood, and set off up the A30 and over Bodmin Moor. We leave the A road, and then the B road, and then any road that might conceivably be called a road, venturing deeper into the Tamar valley, and perilously close to the Devon border. I’ve seen many places but Cornwall in May makes my heart sing the loudest. Green hedgerows bursting into life, crowding the road in a profusion of pinks and purples, peppered with the yellow of buttercups.

We wind down into the steep lanes of Calstock, our destination an Air B&B with river views. We are welcomed by the ebullient Julian, a former BBC cameraman who, with his wife, walked into this house in the late 80s and knew that somehow they must buy it. Emerging from the road down steps to the rear terrace, we are in no doubt as to why. Before us is a picture; the green slopes and the winding river, framed by the soaring arches of a viaduct. On the opposite slope, cows wander down the Devon hill to queue for milking. Jackdaws nest in the chimney pots of the house below us. Sparrows flit from tree to tree. Without even entering the house, we know that we will sit on this balcony for hours, so intoxicating is the scene.

The apartment itself, the garden level of a three storey granite house, is a contrast of styles. The bedroom, for Ma, is a sleek and modern space, with floor to ceiling windows echoing the arches, and a large wet room, the best, she says, she’s ever seen (she later admits to only having seen one other in her life!). The main living area, with its kitchen perched up a step, is reminiscent of a Moroccan souk (I say this, though again I must admit to never having visited Marrakech, but you get the picture…). Deep reds and pinks, an iron bed draped in a beaded throw, and assorted objects from Julian’s far flung travels. A sofa, an armchair, a dining table; double doors and windows to the terrace. All we will need.

Calstock has the quaint beauty of many a Cornish village, but seemingly without the jostle of tourists crowding its narrow lanes. As is normal for the time of year, folk are at work, painting and finishing off for the summer season, and yet there are houses for sale and shops standing empty. There isn’t a shop in the village anymore; we see where it was, and wonder at the impact this will have had. The cafe is closed so we take the car back out a few miles to a garage and load up with whatever food and wine its shop can muster.

In the early evening, we feel a longer walk will help us decide whether we want a meal in the pub, so into and through the village we go, finding ourselves navigating an increasingly narrow lane, leaping aside for tractors and Landies. Lambs bleat in the field next to us and on the opposite side of the road, a dry stone wall stretching twenty metres or so is stuffed with tiny toys, presumably gathered from crackers and cereal packets over the years and inserted into the cracks, keeping watch, perhaps, for hapless wanderers.

Having escaped the watchful eyes of the Playmobil and Lego piskies, we find ourselves in a wildlife reserve, preserving both the natural and the industrial heritage of the area. Okel Tor Mine produced copper, tin and arsenic and at its height in the 19th century employed 200 people, but the gentle evening sun makes it easy to forget the hard and dangerous times those must have been, when all that stood between a man and the deadliest of materials were sackcloth gloves and mask.

Ma’s adventurous spirit is beginning to glimmer, and I have fond flashbacks of random hikes around remote camp grounds when John and I were in the US. Arriving somewhere in the golden evening sun and exploring whatever was nearby was one of our simplest pleasures. It’s not something Ma and I have ever done, so to spend time wandering these leafy paths is very special. I say that for me; the steps back up to the main path may have given her other ideas…

Our step duty more than done, we agree that our late lunch had been sufficient, so all that’s needed is a glass of something cold on the balcony, a few snacks, and an evening staring at the view. Julian joins us for a glass of wine, bringing Ma a bottle of bubbly to say a happy birthday. Having been widowed himself, he is incredibly kind to Ma, appreciating how emotional it is for her to be away from home for the first time without Pa.

Tuesday dawns with mist over the viaduct, turning to blue skies once my morning coffee is through. Our day to visit Cotehele and Ma is set on walking, having seen a footpath signposted on our evening adventure. An admirable intention, however she has absolutely no sense of direction, as her insistence that we head back towards the river the night before (instead of back up the bank) had underlined; I ignored her and we were back before sunset. I’m happy to walk but not without some kind of map or guidance, and I should expect no help from the woman who has only recently conceded that flip flops are not an acceptable form of footwear for a serious hike.

Fortunately, Julian appears, with a map of the local footpaths, and a reassurance that the way is well sign-posted. And so we set off, Ma in something verging on sensible sandals, me in my trainers, with water, a map and high hopes. The day is glorious, sun beaming over the Tamar, birds tweeting, and more wildflowers than you can shake a pasty at.

Our gentle meander along the river is soon arrested by a slog uphill, to where the Tudor mansion sits, high above the Tamar, mostly hidden from via among the thick May foliage. We climb through cool wooded paths, catching glimpses of the river below and, far off, our terrace, until we emerge into the manicured splendour of Cotehele’s formal gardens.

While it’s emotional to be here without him, Ma is nevertheless full of delight at finally visiting what in her opinion is the jewel of Cornwall’s historic homes. The house, to me at least, is fairly interesting, but the location, gardens and views, make it outstanding. It’s the Cornwall of dreams, a hidden valley, tidal river, a feeling of secrecy and being tucked away from the world. We pass a happy day wandering, learning about the history of the house and the startling selection of weaponry that adorns the walls of its great hall.

After the obligatory National Trust lunch, a walk around the gardens, and a stroll down for a coffee at the river-side cafe, we make our way back, this time down hill and looking forward to another evening on the terrace.

Our evenings outside have provided us with an unexpected new obsession: The viaduct. With nothing more to do than sip wine, gaze at the river, and chat or read, we find ourselves pouring over the books of local history Julian has collected, reading in detail about the history of the giant structure. We’re unexpectedly hooked on how it was designed, the construction materials, and comparing the detailed photos of the building process with the structure we can see before us.

Beneath us, the Tamar flows on and as the evening draws in, the scent of jasmine wafts around us while we trade tales of pulley systems and scaffolding. Unspoken is the knowledge that if Pa were here, we would never move him, the perfect storm of his beautiful Kernow and a working railway line in sight. The train trundles over periodically, on a timetable opaque to us, and we imagine who is coming and going on its single track, high over the river. Could John secure a job here, we dream, and we all buy a home on this road, positioning ourselves to wave to him on his return each evening from whatever hospital exists on the distant Devon bank?

Lost in our day dreams, we watch the candy floss clouds cast their reflections into the river and the colours fade through oranges and reds. As the last of the light leaves us, the final train rolls back into Cornwall, its two carriages yellow silhouettes against the deep blue. Silence covers the valley and we retire inside. Tomorrow, we too must return, back to Penzance and to the memories at home, though with more to take with us and sustain us until the next time, which, having enjoyed her mini-break, Ma promises will not be so long. Another tale to come, perhaps this time beyond the border…