A coast by any other name 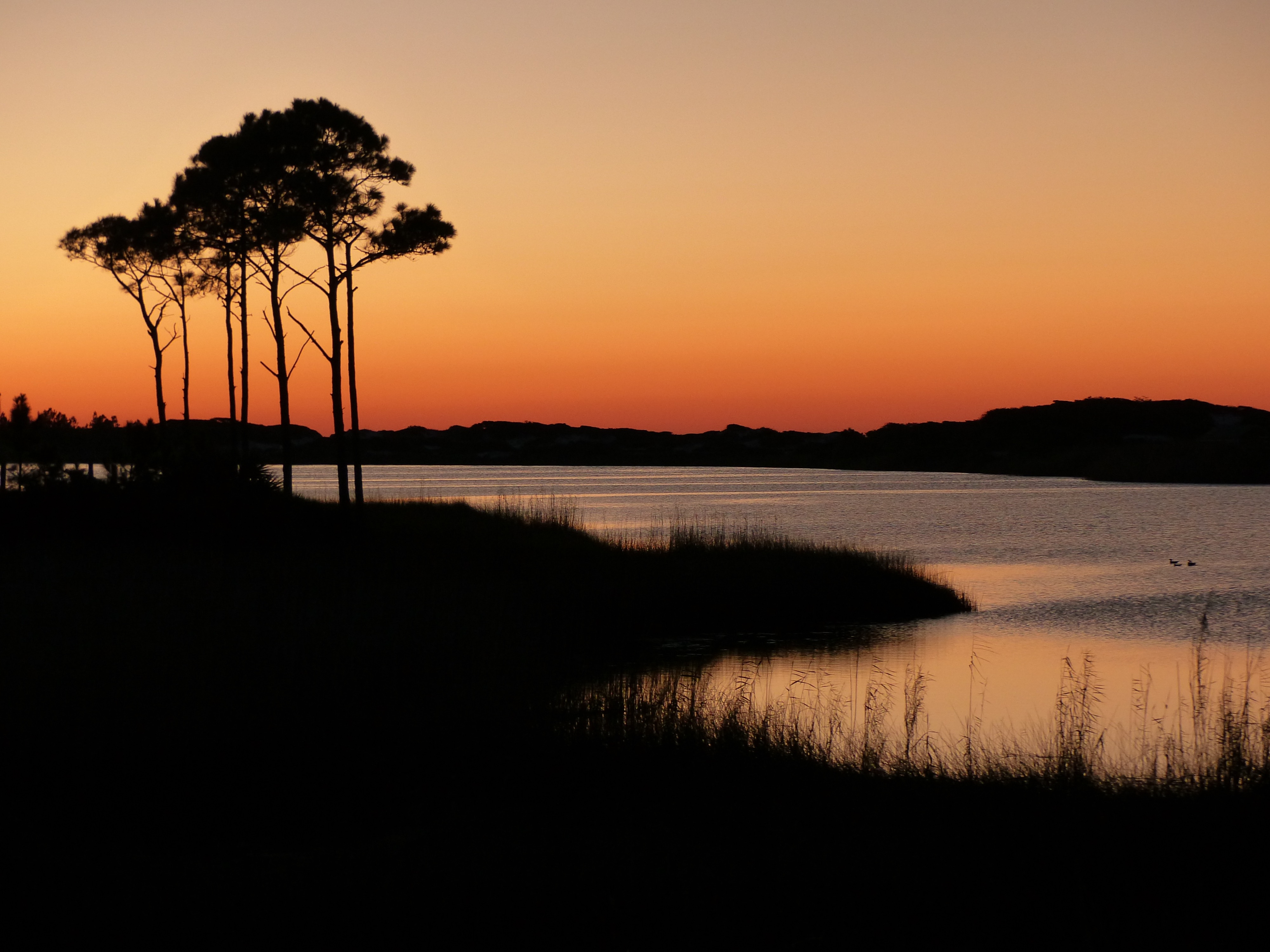 Having sunned ourselves and stuffed ourselves in southern Florida for weeks, late December was the time to head for the Florida Panhandle and start working across to meet friends flying in to New Orleans from LA. For those unfamiliar with this part of the Sunshine State, it’s the top left, the bit of Florida that runs along the northern coast of the Gulf of Mexico to meet Alabama, where you enter the Deep South.

We decided to break the drive into chunks, hoping to enjoy a stretch of coast we’d seen briefly in 2013 as we zoomed through en route from New Orleans to Savannah, when we’d been charmed on a brief lunch stop by the stunning white sands at Destin. Below are some highlights from our journey.

First up was St. Andrew’s State Park, near Panama City . To get there we drove a long way across a lot of fairly dull Florida scrubland, changed time zones and lost an hour, and discovered en route that there were severe weather warnings for the area. This prompted the download of my weather app, which would prove invaluable at a later date. St. Andrew’s is a big park, with some interesting birds and a lovely beach. The weather wasn’t really in our favour, though, so our stay there was spent mainly getting through maintenance and admin tasks. We did see some good gators, and spent an unexpectedly lovely afternoon in Panama City (see our earlier post).

After our four days at St. Andrew’s, we were off to St. George’s, a remote island off the coast of the Apalachicola National Forest. The campground itself was 4 miles from the entrance to the park, along windswept sand dunes, and was wildly beautiful.

We had a restaurant recommendation for The Owl Cafe, in the quaint fishing town of Apalachicola itself, and enjoyed a New Year’s eve meal of delicious seafood and champagne there before dancing through to midnight at another bar in town.

The first day of 2016 dawned, and our hangovers could be sated only by an emergency run for crisps, sugar, and grilled cheese sandwiches, followed by Die Hard 2 (I forgot how bad the writing is) and Die Hard: With a Vengeance (Samuel and Bruce, genius combination). Once we’d carbed up and Coked up (the liquid variety), we set out on a walk, just as the rain started.

Fearless hikers that we are, we strode on through the trail towards the beach, spotting countless birds on the way before reaching the most stunning stretch of unspoiled shoreline, lined with shells which far exceeded those we’d seen during our Christmas break on Sanibel Island, a beach widely accepted as the number one shelling spot in the region. A beach walk is our favourite way to spend New Year’s Day and this one was up there with the best. The sea air blasted through our fuzzy heads, we chatted about what we hoped for 2016, and collected a few of the beautiful shells to remember this by. It was the perfect start to the year.

We discovered that this stretch of the coast is known locally as The Forgotten Coast. We definitely won’t forget it, and plan to return to another of the island parks, St. Joseph’s, when we come back across in February.

Heading west again, Grayton Beach State Park  was our next stop (noticing a theme here..?) and we were doubtful that it could match the beauty we’d seen so far. Boy were we wrong. We pulled into the campground at sunset, dumped the trailer (in as much as you can dump a 26 foot long house on wheels), and darted through the trees behind our site to see the last of the light fading.

The south-facing beach was so close to our spot and the light so beautiful, we decided to get up at (*audible gasp*) dawn the next morning, to go and watch the sun rise on the beach. We are not prone to such romantic ideas, primarily because getting me out of bed in the dark is like asking a turkey to vote for Thanksgiving. Nevertheless I was convinced, as I was in closer proximity to a beautiful sunrise than I had ever been, and it was a truly memorable experience.

In daylight it became clear why this part of Florida also goes by another name – the Emerald Coast. Taking  a walk from Grayton to nearby Seaside, a planned town whose Stepford-esque perfection made it the ideal filming location for The Truman Show, we couldn’t help but be entranced by the gleaming greens of the water.

It wasn’t all wholesome beach walks at Grayton. We also visited the Red Bar, recommended to us by a couple we got chatting to in Apalachicola.  An unassuming tiki-bar from the outside, inside it’s an explosion of red lighting, with all manner of artefacts hanging from the walls and ceiling, including a huge Arsenal flag.  On a Sunday night in the first week of January, we were surprised to find it packed and buzzing, and to eat a delicious egg-plant (aubergine) stuffed with local shrimp and scallops. A band was playing what John described as funky dub-step (I’m not clear that this is an actual genre) and we were pleased we’d followed up on this suggestion; it’s so much more exciting than reading a guide book.

From Grayton we were bound for our final stop before New Orleans – Fort Pickens Campground, on the Gulf Islands National Seashore. As it’s part of the National Park System, our America the Beautiful Pass came in handy for getting our entry ( otherwise $15) for free. I expect it’s obvious by now that nothing gets me going like a beautiful beach, and the colours of this one took my breath away when we crossed the dunes from our campsite to get our first glimpse of the water.

As the name suggests, there is also a fort on the island, built to secure the deep harbour at Pensacola from those pesky Brits and used later during the Civil War when forts on either side of the entrance to the bay were held by opposing forces. We enjoyed a free talk by an enthusiastic young ranger on the historic progression of coastal fortifications, which even I found interesting – John of course was in his element! We’ve been surprised by how many free activities are on offer at these campgrounds; a huge bonus when travelling on a budget.

At the beach we also got chatting to Alan, a photographer who spends most of his time travelling in his fifth-wheel trailer. He told us that this stretch of coast is also known as ‘the Redneck Riviera’, a name significantly less romantic than the others we’d heard. Traditionally, he explained, wealthy tourists from the east-coast cities of the US would head to the Atlantic coast of Florida (St. Augustine to Miami), those from the mid-west favoured the Gulf-coast (where we’d loved the Sarasota area), and people from the Deep South (Alabama, Mississippi, Louisiana) would flock to the Panhandle. From what we’ve seen of this coast ( Forgotten, Emerald or Redneck Riviera), its got a beauty all of its own, and to miss out this part on any tour of Florida would be a great loss.